What in the world: Woods rockets to No. 21 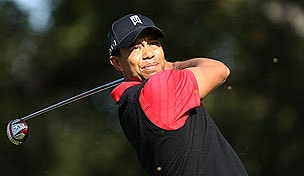 Getty Images
LAS VEGAS - OCTOBER 17: Troy Matteson hits his approach shot into the 3rd hole during the third round of the Justin Timberlake Shriners Hospitals for Children Open at the TPC Summerlin on October 17, 2009 in Las Vegas, Nevada. (Photo by Marc Feldman/Getty Images)  -

After notching his first worldwide win in two years, Tiger Woods is now No. 21 in the Official World Golf Ranking.

Woods won the Chevron World Challenge on Sunday, which offers world ranking points despite the 18-man field. He improved 31 spots in the ranking, earning 40 points for the victory.

It was his greatest single-week haul of points in the last two years. He earned 30 points for falling in a playoff to Graeme McDowell in this same event last year, better than the 27 points he earned for finishing T-4 at the 2010 Masters and U.S. Open.

Chevron runner-up Zach Johnson improved to 33rd from 47th, while third-place finisher Paul Casey moved up two spots to No. 19.

The top four players remain unchanged, though it took a win by Rory McIlroy to keep it that way. McIlroy captured the UBS Hong Kong Open to stay at No. 2. The victory held off Lee Westwood, whose successful defense at the Nedbank Golf Challenge would have otherwise moved him to No. 2.

With his first win in Hong Kong, McIlroy closed the gap No. 1 Luke Donald to 2.05 points.