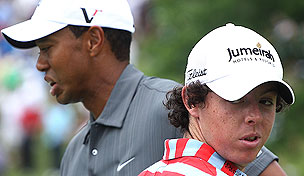 Getty Images
KAHUKU, HI - FEBRUARY 12: Natalie Gulbis hits her tee shot on the 16th hole during the first round of the SBS Open on February 12, 2009 at the Turtle Bay Resort in Kahuku, Hawaii. (Photo by Andy Lyons/Getty Images)  -

On the heels of Rory McIlroy's record-breaking victory at the 111th U.S. Open, Rex Hoggard and Jay Coffin debate the most dominating performance in major championship history.

BETHESDA, Md. – On paper Tiger Woods’ 2000 romp at Pebble Beach looks like the Grand Slam litmus test for greatness, and his breakthrough at the 1997 Masters may have had an even greater impact, but on the enormity of the accomplishment hang the crown on Rory McIlroy’s Congressional tour de force.

When Woods rolled in 2000 he’d already hung 19 PGA Tour titles and two majors on the game and enjoyed the luxury of a clear major consciousness void of the type of critical and constant self-analysis that must have haunted McIlroy heading down Congressional’s first fairway Sunday afternoon.

By comparison, at the tender age of 22 McIlroy sported just one Tour title and had already coughed up a pair of major leads with cards of 80, first in Round 2 of last year’s Open Championship and again in the final turn at this year’s Masters.

It was a psychological 400-pound gorilla that few could have rallied out from under. McIlroy admitted as much, pointing to his Saturday 68 in relieved tones.

“Yesterday was a big day for me to get over that, playing in the last group, going out with the lead,” he said. “To play such solid golf, that gave me a lot of confidence going into today.”

Woods’ 2000 walk-over may have better math, but there’s no arithmetic that can measure the enormity of McIlroy’s accomplishment.

It’s human nature to think that the most recent historical feat is the greatest of all time. That’s not to say that it never can be, but we tend to have selective memory more often than not. We so badly want what is freshest in our minds to be the best in history. It makes us feel good. Doesn’t make it correct.

Sure, Rory McIlroy’s cruise around Congressional is an epic performance and is the lowest total score in U.S. Open history. But I’ll still take the dude who turned in victory while winning by the largest margin ever on a tougher golf course.

It’s debatable whether it’s easier for one player to distance himself from the field on an easier golf course or a more difficult one. I contend it’s more difficult to create separation on a tough track because you have to be in complete control of all phases of your game all four days. An awkward bounce here, a bad lie there and it’s easy to come unraveled.

Here, the softer conditions made it much easier to control the golf ball. Remember, McIlroy may have won at 16 under, but 19 other men were under par for the week, including Jason Day at 8 under. When Woods dominated the 2000 Open he shot 12 under. The next closest pursuer was 3 over.