Who authored the biggest surprise of 2011? 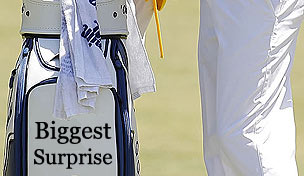 From the unforeseen major champs to head-scratching rises and falls, 2011 kept serving us one surprise after another. But among all the chaos, what was the biggest surprise of them all? GolfChannel.com senior writers Rex Hoggard, Jason Sobel and Randall Mell weigh in.

He extended his victory streak to eight seasons, posted his best finish ever at the game’s oldest championship and is likely still being impacted by the effects of psoriatic arthritis, but however you slice it, Phil Mickleson’s season is the stuff of double takes.

Maybe it’s unfair to expect more from a 41-year-old with health issues and enough concerns at home to distract the Dalai Lama, but 2011 was Lefty’s to take, particularly after he finished ’10 with a competitive whimper.

As a rule, Mickelson rebounds. Always has, which explains why the bar was set so high for 2011, and when he began his season with a runner-up showing at Torrey Pines – where he had struggled since the Rees Jones redesign – and a victory at the Houston Open, many tabbed the new year the season of the southpaw.

After Houston, however, he posted just three top 10s, including his tie for second in the wind at Royal St. George’s, and finished 15th in FedEx Cup points.

It was supposed to be the year Mickelson finally ascended to the top of the World Golf Ranking. Instead, he dropped from fourth to 12th and made more news with his switch to the long putter than his stay on leaderboards.

With Tiger Woods reeling, this was Mickelson’s time, but as the calendar closes it feels more like a missed opportunity than a milestone season.

Keegan Bradley opened the year No. 329 in the Official World Golf Ranking.

If you’re not a devoted golf fan, you probably didn’t know he was Hall of Famer Pat Bradley’s nephew. In fact, before his rookie campaign began, you probably never even heard of him.

The year ends with Bradley a two-time PGA Tour winner, a major champion and a serious candidate for PGA Tour Player of the Year.

Who surprised us with a bigger move than that in 2011?

You want a surprise? How about all the outrage over Tiger Woods being chosen over Bradley as a U.S. Presidents Cup pick. Who would have believed that coming into this season?

As surprises go, they didn’t get bigger than Bradley this year.

There’s no easy way to say this, so I’m just going to come right out with it. I didn’t think he had the onions. Didn’t think he had what it took to be an elite, top-tier player – let alone the No. 1-ranked golfer in the world.

In my eyes, Donald was a career underachiever. Sure, he’d played on three Ryder Cup teams and owned a world-class short game, but it rarely resulted in victories. Since turning pro a decade earlier, he claimed just a half-dozen titles – three on the European Tour, two on the PGA Tour and the late-season Target World Challenge (now Chevron) – and only one in the previous four seasons, a triumph at the 2010 Madrid Masters.

That all changed this year. With one event left to play on the Euro circuit, he’s already tripled his victory output for the previous four years, winning the WGC-Accenture Match Play Championship, Scottish Open and Children’s Miracle Network Classic. He grabbed two firsts, two seconds and two thirds on the PGA Tour, resulting in the money title, and is on track to mirror that accomplish overseas in Dubai this week, as well. He even improved at the majors; after four top-10s in his first 30 major starts, he was 2-for-4 this season.

Unlike a player like Keegan Bradley, Donald didn’t come out of nowhere to shock the world, but he hadn’t shown signs of breaking through in such a big way, either. Consider it a pleasant surprise – and the biggest surprise of the 2011 season.