What We Learned: Daly, Grace and Love 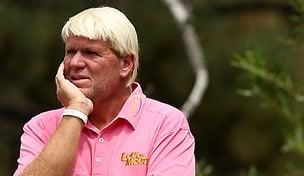 Each week, GolfChannel.com offers thoughts on 'what we learned' from the week. This week, we examine the ups and downs of John Daly, a lesser-known golfer putting up big numbers, and Davis Love being a stand-up captain.

John Daly is still some of the most compelling theater in golf - and he's easily one of the most compelling stories of the Fall Series. Entering the week at No. 132 on the money list, Daly appeared to be on the verge of getting inside that magical 125 number prior to theweekend. A second-round 63 put him into contention in Las Vegas, but an 86 the next day sent him careening down to the bottom of the leaderboard. Those two rounds should serve symbolically for a career that's seen more ups and downs than an elevator factory. Whether Dalycan enjoy more rounds closer to 63 than 86 these next few weeks remains to be seen. What we can be sure of is that they will indeed be seen, one of the game's most compelling stories enduring throughout his chase to earn full-time playing privileges once again. – Jason Sobel

Aside from the infield fly rule applying 50 feet into the outfield, I learned Branden Grace should be considered the favorite for European Tour Player of the Year. Rory McIlroy is going to win the honor, because people will focus on his worldwide accomplishments (see Vijay Singh, 2004). But Grace has four wins in 2012, he's a true European Tour player and he's got four wins in 2012. That's kind of important since only two other players have multiple victories this season. There are still eight more events on this season's calendar, including a WGC event and the Tour Championship, but at the moment, Grace gets my vote. – Mercer Baggs

Much like head coaches in other team sports, Ryder Cup captains receive too muchblame for a loss and too much credit for a victory. Davis Love III is merely the latest example. Earlier this week the U.S. skipper penned a first-person column in Sports Illustrated in which he wrote, “If you need to blame somebody for this loss, blame me.” That’s honorable, but misguided. Love wasn’t the reason the U.S. team lost, despite all of the interrogation during the past week in Vegas. The onus should always fall on the players, even if it usually doesn’t in team sports. In the messy aftermath, though, Love shifted the focus off his players and onto himself. He never hit a shot at Medinah, yet he still shouldered the blame. Now that’s a good captain. – Ryan Lavner

That next year’s move to a split-calendar schedule may be long overdue. Maybe it’s the Ryder Cup hangover, or perhaps it was a dramatic lack of buzz, but this week’s Las Vegas stop had all the flair of a Sunday bingo marathon. Ryan Moore won, his second Tour tilt, but there was little by way of true drama. Not sure next year’s “fall start” to the new season will be any better, but we can’t imagine it would be any more mundane. – Rex Hoggard

The No. 1 player on the planet may be from Northern Ireland, and the United States might have the strongest tour in the world, but who has been on a better roll than the country of South Africa? After three straight years with a major champion (2010 Open champ Louis Oosthuizen, 2011 Masters champ Charl Schwartzel and 2012 Open champ Ernie Els) South Africa could be ready to crown a fourth straight in 2013. His name is Branden Grace. The 24-year-old South African claimed his fourth European Tour title Sunday at the Alfred Dunhill Links, displaying the kind of rhythmic swing that so many of his better known countrymen have. He is almost a lock to represent the International team at the 2013 Presidents Cup at Muirfield Village. He might even have a major by then. – Damon Hack

Ernie Els could be influencing the outcomes of major championships for decades to come. Branden Grace, winner of the Alfred Dunhill Links Championship on Sunday, has the tools to step up in class and contend in major championships next year. Take the word of Els. He believes Grace is well suited to winning a British Open. He said as much this weekend watching Grace run away from him and other contenders in the European Tour event in Scotland. Grace, by the way, is yet another product of the Ernie Els Foundation, a program Els founded in his native South Africa in 1999 to identify and develop promising young talent. Louis Oosthuizen (British Open) and Charl Schwartzel (Masters) came up through the foundation and went on to win majors. With his terrific performance in winning the Dunhill on classic links courses at The Old Course at St. Andrews, Carnoustie and Kingsbarns, Grace, 24, showed how well his game may fit British Open style golf. It was Grace's European Tour leading fourth title this year. – Randall Mell