What We Learned: Frys.com Open 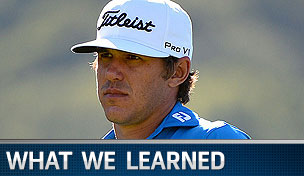 Getty Images
AUGUSTA, GA - APRIL 07: Fred Couples talks with his caddie Joe LaCava on the first hole during the first round of the 2011 Masters Tournament at Augusta National Golf Club on April 7, 2011 in Augusta, Georgia. (Photo by Andrew Redington/Getty Images)  -

Each week, GolfChannel.com offers thoughts on 'what we learned' from the world of golf. In this edition, our writers weigh in on the value of giving sponsor exemptions to up-and-coming young players, Lexi Thompson's win in Malaysia and the trend it signals in women's golf, and flaws that still exist in the pathway to earning PGA Tour cards.

More than ever before, it's imperative that PGA Tour sponsors use their exemptions on the best possible candidates. At the Frys.com Open, Brooks Koepka was just the latest in a long line of examples who proved that a player doesn't need a full-time membership to contend for a title. Exemptions are often given to veteran players whose loyalty is rewarded with a spot in the field when they need one. There's certainly nothing wrong with that, but sponsors similarly need to see the benefit of cultivating the next superstar. For years, the Travelers Championship has done this, offering spots to talented young pros who in turn keep coming back once they've hit the big time. This strategy should – and based on Koepka as the latest example, very well could – become the rule rather than the exception. – Jason Sobel

I like me some Brooks Koepka. I know I’m not supposed to root for players – especially one who went to Florida State – but he seems like a good kid. He’s not going to wow anyone with his personality, but few of today’s young guys do. Koepka has a great background story and handled success and defeat this week in an admirable manner. Should be fun to follow him this year … or season … or next year, wherever he may play. – Mercer Baggs

Lexi, Lydia, Charley and Ariya are lined up to make large marks in the women's game as teen dynamos. Thompson (18) and Ko (16) have already won two LPGA titles, each with one in the last two months. Hull (17) has five second-place finishes on the Ladies European Tour this year, and Jutanugarn (17) has an LET title this year and a near win on the LPGA tour. Hull and Jutanugarn will soon be bringing their games to the LPGA on a regular basis. That's good news for the women's game. – Randall Mell

The PGA Tour’s qualification system needs some tweaking with a capital T. When introduced, the Web.com Tour Finals were lauded by the Tour as a system that would reward performance across a longer period of time than just six rounds of Q-School, especially for the top 25 money-earners from the developmental circuit. Instead, as the 2013-14 season got underway, several players were unable to debut their freshly minted PGA Tour cards this week at CordeValle and even more have been relegated to a Monday qualifier to gain entry into next week’s field in Las Vegas.

While the Tour gets points for creativity, there are clearly significant flaws in the end product as players are simply not going to get the number of starts they expected before the calendar turns to 2014. Much like the FedEx Cup Playoffs underwent some changes after implementation, so too the path to the PGA Tour is in need of an overhaul if the 50 newest Tour members are to receive a fair chance to succeed each season. – Will Gray

That the PGA Tour’s new qualifying system is not the only path to the Big Leagues. First Jordan Spieth blazed a unique trail to Tour membership, beginning 2013 with no status and ending it with a start at the Tour Championship and Presidents Cup. On Sunday, Brooks Koepka came within nine holes of joining Spieth on Tour. Not bad for a player who was preparing for his pro debut at this time last year ... on the European Challenge Tour in Italy. – Rex Hoggard