What We Learned: Future of golf looks athletic 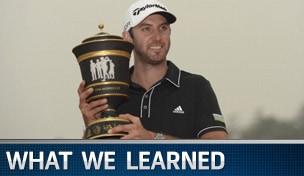 Each week, GolfChannel.com offers thoughts on 'what we learned' from the world of golf. In this edition, our writers weigh in on the future of athletic players, the evolution of the silly season and the potential of the Asian golf market.

There isn't much that's very silly about the silly season anymore. Late fall and winter are peppered with competition that becomes more meaningful every year. Dustin Johnson just won a World Golf Championship event (HSBC Champions) that now comes with FedEx Cup points. He did so in an event that is also part of the European Tour’s Race to Dubai. With Ian Poulter, Graeme McDowell and Justin Rose picking up big paychecks behind Johnson on Sunday, the Race to Dubai tightens going into this coming week’s Turkish Airlines Open, the second-to-last event in the race’s Final Series. Henrik Stenson’s bid to win both the FedEx Cup and Race to Dubai in the same season is in jeopardy with McDowell, Rose and Poulter now breathing down his neck. Adding to the intrigue at the Turkish Airlines Open is Tiger Woods, who makes his last tournament appearance this season in an event that is considered official on any tour. – Randall Mell

I don’t know exactly what the future of professional golf will look like, say, a decade or two from now, but an athletic player built more like a basketball small forward than a traditional golfer winning a limited-field tournament in China sounds about right. Considering I’ve just described Dustin Johnson’s victory at the HSBC Champions, perhaps we’re closer to the future than we realize. It should come as no secret that the game is attracting better athletes these days. (If you’re 16 and built like a linebacker, would you rather pursue a dangerous game with a short shelf life of a career or a safer endeavor where careers never end?) Don’t be surprised if limited-field events become more of the norm. (It’s a win-win for both the organizing body which gets an elite field and the players who compete for guaranteed money and more world ranking points.) And clearly Asia is the game’s greatest growth region. (Hosting a WGC was one step, having it considered fully official for the first time this year was another; there’s no going back from here.) That’s not to say the game will see major changes, but more athletic players, limited-field events and increasingly important tournaments in Asia are all on the short list of what we’ll likely see. This week gave us a glimpse into that future. – Jason Sobel

The European Tour may have been the first world circuit to recognize the growth potential of the Asian golf market, but it won’t be the last or the largest. News on Sunday that the PGA Tour will launch PGA Tour China next season comes on the heels of the circuit’s first official swing through Asia. It took Ponte Vedra Beach, Fla., some time, but it turns out there is meaningful golf outside the Lower 48. – Rex Hoggard