What We Learned: The power of potatoes 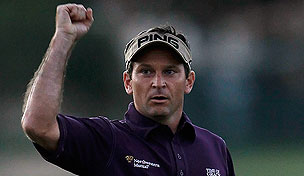 Each week, the GolfChannel.com team offers up thoughts on 'what we learned' from the most recent PGA Tour event. This week, the team ponders the aftermath of Mark Wilson's victory at the Humana Challenge at La Quinta.

I learned that a professional golfer doesn't need the steely resolve of Jack Nicklaus to win a tournament. He doesn't need the confident machismo of Arnold Palmer, nor the dark intimidation of Gary Player.

Holding a one-stroke lead heading to the final hole of the Humana Challenge, Mark Wilson was the focus of Golf Channel cameras while standing on the teebox readying himself for the biggest shot of the tournament.

Was he visualizing the center of the fairway? Coolly standing away from his fellow competitors? No and no. Instead, Wilson was laughing and joking with his playing partners. He was so calm that a nearby microphone caught him saying something about mashed potatoes.

Seconds later, Wilson mashed his drive. It led to a two-putt birdie and his third win in the past 13 months. Sometimes nice guys don't finish last after all. – Jason Sobel

I learned that no matter how scripted a PGA Tour golf tournament is planned, Mother Nature ALWAYS trumps everything. Wind, rain, lightning, fog ... it is forever tough to break par when it comes to competing with Mother Nature. – Golf Guy

I learned that tweaking a tournament format (that was a disaster to begin with) and having a former President involved in your PGA Tour event is going to give you some pretty good mileage. Weather was terrible on Saturday, which kept President Clinton from completing his round, but his presence made a difference in an event that had one of the weakest fields on Tour in 2011. This year Greg Norman and Phil Mickelson added star-power but it was still Bubba – Clinton, not Watson – who stole the show. Good to see the Hope shine again, even if it isn't still called the Hope. – Jay Coffin

As much fun as it was to watch Robert Garrigus bust ridiculously long drives, his finish – T-2, two strokes back – was yet another reminder that you drive for show and putt for, not so much dough as trophies. The most important club in Garrigus’ arsenal was his new long putter, which replaced his old short flat stick, but did not prove to be a magic wand.

If nothing else, though, Garrigus should be far less prone to lower-back issues with the long stick. It’s a miracle his old kid-sized model didn’t leave him permanently stooped over. – Al Tays

I learned to bet my mortgage on Mark Wilson when weather gets in the way of a PGA Tour event. The Wisconsin native has won his last three PGA Tour events in tournaments plagued by weather. He won the Sony Open after droves of rain, in Phoenix after frosty conditions and the Humana after a desert hurricane. When the locusts come, I will wager on Wilson. - Ryan Ballengee

I learned that if Bill Clinton were ever able to campaign for the U.S. presidency again, I’d vote for him. This week’s event was always a beloved desert staple when Bob Hope was involved with it and if there were ever one man who could ignite similar interest and support for the La Quinta classic, that man is former President Bill Clinton. One can’t help but admire his stance on childhood obesity and his ‘walking the walk’ by losing 24 pounds, himself, and becoming vegan. – Bailey Mosier