What We Learned: The Hyundai TOC in Maui 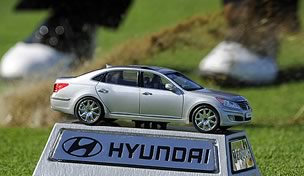 Each week, the GolfChannel.com team will offer up thoughts on 'what we learned' from the most recent PGA Tour event. This week, the team ponders the aftermath of the Hyundai Tournament of Champions, where Steve Stricker held onto his substantial lead in Monday's final round to top Martin Laird and the other 25 players in the field for his first Maui victory.

I learned that a change in the calendar doesn’t determine a change in skill level or talent. At the beginning of every year, we try to prognosticate which golfers will enjoy a massive dose of success and which will see a major drop-off in results.

Steve Stricker seemed to fit the latter category. He turns 45 next month and owns a game predicated on putting – a skill that often starts eluding top players later in their careers. Maybe that will gradually be the case, but this week Stricker looked very much like the same player who won twice last season.

Just because the calendar has changed doesn’t mean everything will change with it. So much for that predicted drop-off. Stricker isn’t going anywhere for a while. – Jason Sobel

If the PGA Tour insists on starting the season this soon in the new year, I believe starting in Maui is the perfect place to set the tone for the year. The limited field, the breathtaking vistas from Kapalua's Plantation Course, and of course, the humpback whales frolicking in and around the Hawaiian waters. – Golf Guy

The season’s first turn proved for the umpteenth time that, like Savile Row, the London street known for its tailoring timelessness, good putting never goes out of fashion. At Kapalua, where statistics like greens in regulation and fairways hit are relatively meaningless, Steve Stricker cruised to victory on a 28.5 putts per round average.

We also learned that cortisone, although not considered a “performance-enhancing drug,” can work miracles. At East Lake in September Stricker sounded like a man on the brink of career-threatening neck surgery, two cortisone shots and four months later he’s halfway home to becoming the only player to record multiple PGA Tour victories in four consecutive seasons. – Rex Hoggard

I learned that Steve Stricker was faking a neck injury during the latter part of 2011. He just wanted our sympathy right? If his neck was that seriously injured, no way he'd have rebounded so shortly after with a dominating victory at the Hyundai Tournament of Champions.

It was only three-plus months ago when Stricker withdrew from the BMW Championship. He didn't play well at the Tour Championship, failed to rekindle the Presidents Cup magic with Tiger Woods in November then played poorly again at the Chevron World Challenge, finishing 16th in an 18-man field. He was a walking question mark.

What I really learned is that Stricker is good, damn good. Can't wait to see how he follows it up this week at the Sony Open.  – Jay Coffin

Apparently, that’s not lava spitting from those Hawaiian volcanoes.

Wisconsin’s Steve Stricker won the Hyundai Championship Monday on the island of Maui, and now fellow cheesehead Mark Wilson takes center stage on Oahu. Wilson is the defending champion at the Sony Open this week.

Who knew Hawaii was a dairy state? It isn’t, of course. In fact, there are only three dairy farms in the state of Hawaii. Still, Wisconsin looks like it owns the state this week.

And at 44, Stricker looks like he won’t easily give up his perch as the highest ranked American in the Official World Golf Ranking. – Randall Mell

I learned that it’s never too early in the year for controversy, and the 2012 season-opener delivered.

After Nick Watney’s opening round at Kapalua, his caddie Chad Reynolds was brought in for questioning by PGA Tour rules official Slugger White. Reynolds was believed to have tested the surface of the green on the seventh hole, where he bent down behind Watney and moved his hand back and forth in a swiping motion on the green.

It was decided – Reynolds said he didn’t touch the surface, Watney stood by his caddie’s word and White concurred with the gentlemen – that there was no breach of the rules and Watney did not receive a penalty.