What We Learned: Moore or less 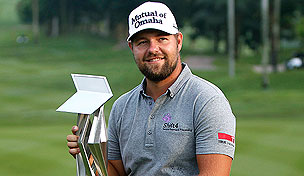 Each week, GolfChannel.com offers thoughts on 'what we learned' from the world of golf. In this edition, our writers weigh in on Ryan Moore's future, how golf is thriving in Asia and how Suzann Pettersen is thriving there, too.

When it comes to Ryan Moore, there are plenty of reasons for optimism. Nine of his last 12 rounds have been in the 60s. He has back-to-back top 10s to start his 2013-14 campaign. After his CIMB Classic victory, the third of his career, he credited his ongoing work with his swing coach, Troy Denton, and his physical trainer. But it’s still too early to anoint Moore, 30, as one of the players ready to break through in the majors. He has only a pair of top 10s in 23 major starts, and none since 2009. He hasn’t finished inside the top 20 in his last 12 major appearances. Two of his three wins have come in late fall, when many of the world’s best are resting from a long year. Moore is a short hitter who wasn’t particularly sharp with either his irons (114th) or his putter (110th) in 2013. A year earlier, he was 61st in greens hit and 22nd in putting en route to his best season as a pro, when he had eight top 10s and a victory. If he’s to transform from consistent contender to major champion, he’ll need to continue to sharpen all aspects of his game. – Ryan Lavner

Remember the name Chang-woo Lee. I'm not going to pretend to know anything about the 19-year-old Korean other than what I've read in the wake of his Asia-Pacific Amateur Championship title, but I do know he has recent history on his side. That's because each of the last three APAC champions – Hideki Matsuyama twice; Tianlang Guan once – has made the Masters cut. Not that the folks in green jackets care about a little thing like criticism, but they opened themselves up to it when they first started granting an invitation to the inaugural winner of this event in 2009. Instead, they've helped cultivate young talent and watch it flourish. For those asking why PGA and European tour events were held in Asia both this past week and next week, one of the major reasons is growing the game in a region where it's booming. The game is only becoming bigger in the Far East, where players are growing more talented and the thirst is there for better tournaments. These few weeks, with a Korean amateur securing a Masters invitation and some of the game's best showcasing their skills, may not become the norm, but get used to it. In Asia, the game is only going to continue to thrive. – Jason Sobel

Norway's Suzann Pettersen has planted more flags in foreign nations than any Viking ever did. Pettersen is especially fond of conquering Asian events. They love her there, and she loves them back. Pettersen's win Sunday at the Sunrise LPGA Taiwan Championship was a successful title defense. She has won more than a third of her LPGA titles in Asia (5/14). She has six professional titles overall in Asia. She also won a Ladies European Tour event in China this year. Overall, Pettersen has won pro titles in nine different countries. – Randall Mell

According to the PGA Tour, Sunday’s weather delays at the CIMB Classic – two stoppages totaling nearly four hours – was the first of the 2013-14 season. While technically correct, that distinction feels a tad evasive considering the circuit’s track record with Mother Nature this year. Still, we got a primetime playoff Sunday night (Monday morning in Malaysia) between Gary Woodland and Ryan Moore, so let’s call this a push. – Rex Hoggard