What We Learned: From Pebble Beach to Dubai 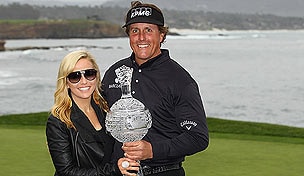 Getty Images
ST ANDREWS, SCOTLAND - OCTOBER 05: Darren Clarke of Northern Ireland plays his second shot to the fourth hole during the final round of The Alfred Dunhill Links Championship at The Old Course on October 5, 2009 in St.Andrews, Scotland. (Photo by Andrew Redington/Getty Images)  -

Each week, the GolfChannel.com team offers thoughts on 'what we learned' from the most recent events. This week, the team reflects on Phil Mickelson's big win at the AT&T Pebble Beach National Pro-Am and what happened – or didn't happen – in Dubai.

I learned that Tiger Woods vs. Phil Mickelson is still the game’s preeminent top card. It seems obvious, but since Woods’ fall from grace in 2009 and Mickelson’s relatively pedestrian play since his 2010 Masters victory, it seems golf’s most intriguing head-to-head had defaulted to others, namely Rory McIlroy vs. Woods.

Even though Lefty lapped Woods by 11 strokes on Sunday at Pebble Beach, the marquee matchup gave an otherwise quiet event an added level of buzz. – Rex Hoggard

Learned a couple of things this week: Phil still needs Tiger, and Rory is no Tiger. After all these years, Mickelson still needs Woods to stoke his competitive fire. I don't think he wins Pebble – and certainly doesn't shoot 64 – alongside Hunter Mahan on Sunday. As for McIlroy, he may be the top talent in the game but he's still more disappointment than dominant in winning situations. – Mercer Baggs

I learned that NFL players and Hollywood actors – both of which spend plenty of time on camera in their professions – get queasy when having to watch themselves and their own golf swings on camera. Highly skilled and successful athletes and actors become humbled by the game of golf. – The Golf Guy

I know that Phil Mickelson just won the AT&T, so what I’m about to say may seem contradictory … but hear me out.

OK, yes, Mickelson won at Pebble Beach, but how many of you can honestly say Phil was the big name you expected to see hoisting the trophy by day’s end?

Watching Tiger Woods all these years has spoiled us – we assume that the player we want to win, will. But evidence as of late would suggest that it’s anybody’s to take and the underdogs are stepping up and finding their footing. – Bailey Mosier

I learned that sometimes we need to take Phil Mickelson at his word. It’s not as easy as it sounds, because the truth often gets lost between his various off-course agendas and sponsor testimonials. Last week, prior to the Waste Management Phoenix Open, I asked Phil whether he could still get motivated after getting voted into the World Golf Hall of Fame. “I love to compete,” he answered. “I'm excited about this year. I'm ready to play.” It sounded like lip service at the time – hey, what else was he going to say? – but this week I learned that he truly is still motivated to find greater success. He proved it on Sunday. – Jason Sobel

Phil Mickelson may not be the best player in the game today, but he is still the most entertaining.

Nobody else is close.

We wondered if he still held the distinction before his victory Sunday at the AT&T Pebble Beach National Pro-Am, but there's no doubt tonight.

At 41, getting ready for Hall of Fame induction, Mickelson still keeps you on the edge of your seat more than any other player. He is still just as capable of spectacular success as he is spectacular failure. Nobody in the game has more range that way.

While there were no impossible shots between a gap in the trees as there was in his last Masters’ victory, Mickelson’s closing 64 ranked among his most impressive finishes with Tiger Woods in his pairing. – Randall Mell

I learned why Phil Mickelson plays money matches during practice rounds with the likes of Dustin Johnson, Keegan Bradley and other young guns. It keeps him young, feeling the constant pressure these kids – my contemporaries – feel on a weekly basis to perform and prove themselves.

With four majors and 39 PGA Tour wins coming into the Sunday showdown at Pebble, Mickelson has nothing left to prove to anyone. He did prove, however, that he still can stand the burning heat of the spotlight on one of the game’s biggest stages. Paired with Tiger Woods, Mickelson relished in the opportunity to show he does, in fact, have a chance of reaching 50 PGA Tour wins. He needs just 10 more, now having won in nine consecutive seasons.

While he waits until April to add to his major tally, maybe Mickelson can start plotting how to continue the streak next season. He’s just five years away from matching Tiger’s 14-year streak and eight away from Jack Nicklaus’ mark. To catch Jack, Mickelson would be need to continue winning on the PGA Tour up to the verge of turning 50. If he keeps running with the young guns who keep him young, that doesn’t sound all that outlandish. – Ryan Ballengee