What We Learned: Presidents Cup 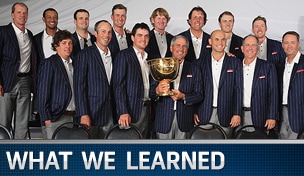 Getty Images
Ray Beaufils certainly stands out while on the practice range of Big Break Greenbrier.  -

Each week, GolfChannel.com offers thoughts on 'what we learned' from the world of golf. In this edition, our writers weigh in on how imperative it is for the Presidents Cup to mix things up so as to garner more excitement, attention and competition.

Allow me to serve as the bright ray of sunshine in what was otherwise a rain-soaked week at Muirfield Village. While there are plenty of negatives to focus on after another underwhelming edition of the Presidents Cup (trust me, I know; I’m writing about all of ‘em in a column), I’m going to highlight a few positives right here. Two of the bright spots for the International team this week – and there weren’t many – were the play of Graham DeLaet and Brendon De Jonge. On a team that was criticized before the week for having a handful of players who had never won on the PGA Tour before, these two proved that it’s only a matter of time before they find their place in a winner’s circle. DeLaet is a superb ball-striker who makes birdies in bunch when he putter gets hot; de Jonge is less dynamic and more workmanlike, but never seemed like the moment was too big for him this week. There weren’t a ton of bright spots for Nick Price’s side, but those two players should parlay the confidence they earned into bigger and better results on the PGA Tour next season. – Jason Sobel

The Presidents Cup is never going to be as compelling as the Ryder Cup as long as the PGA Tour clings to the current format. Although International captain Nick Price asked Tour commissioner Tim Finchem to decrease the number of team matches, which would help alleviate the International’s perceived lack of depth, the commish balked. The Internationals lost by three points and were outplayed in the team format by six points. You do the math. – Rex Hoggard

There was a time Tiger Woods and Phil Mickelson were accused of not embracing these international team events, but nobody can accuse them of that any more. Though it has been a long, hard season for both of them, they didn't just put their talents on display at the Presidents Cup this week going five matches in their aching bodies. They were team leaders. They were practically assistant captains. U.S. captain Fred Couples said he relied heavily on both of them in his decision-making, huddling with them often for their takes on strategy and pairings. Woods and Mickelson are the heart and souls of American teams in every way now. – Randall Mell

Don't be fooled by the final score. Blow this thing up. Start from scratch. Change the format. Alter the selection process. Do something, anything, to generate more interest in the Presidents Cup. This biennial event is not the Ryder Cup – never will be – and that’s OK. It doesn’t have to be. But right now, the Presidents Cup has no identity, other than being a 24-player exhibition in which this year there was more focus on squirrels, handshakes and radars than the actual golf, which, of course, was not competitive. Again. Unless there are seismic changes to this event, it will remain irrelevant. – Ryan Lavner