What We Learned: Reaction to Mahan's withdrawal 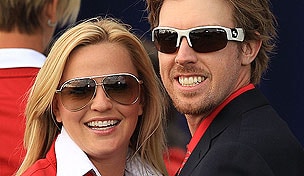 Each week, GolfChannel.com offers thoughts on 'what we learned' from the world of golf. In this edition, our writers weigh in on Canadian Open 36-hole leader Hunter Mahan's sudden WD when his wife went into premature labor, and the rash of low scoring on the Web.com Tour.

Hunter Mahan absolutely did the right thing leaving the RBC Canadian Open when he learned that his wife was going into labor. But we shouldn’t hand him Father of the Year honors.

Many fathers leave work to be with their wives in labor. Mahan’s job just happens to be one that requires him to commute by airplane, sometimes thousands of miles away.

Mahan’s job also has afforded him career earnings in excess of $24 million, and a 36-hole lead – which he held in Canada – does not a victory make. Leaving a business trip early to get home in time for the birth of his daughter doesn’t exactly seem like a huge concession.

Should we acknowledge that Mahan did the right thing? Yes. Should we laud him for doing what he’s supposed to do? No. – Bailey Mosier

After receiving the call that his wife Kandi was going into labor, Canadian Open 36-hole leader Hunter Mahan likely asked himself two related questions: If I withdraw from the tournament to be with her, will I regret it? If I don’t withdraw from the tournament and miss the birth of my first child, will I regret it? For him, the call was obvious – even with a chance for a seven-figure payday at his fingertips. It’s impossible to criticize Mahan for choosing family over golf, but it would’ve been just as impossible had he made the opposite decision. Golfers are independent contractors, which means they work for themselves and no one else. Pretty sweet gig, huh? Anyone who doesn’t like it is probably just jealous that they haven’t been afforded similar luxuries – or angry that he hurt their fantasy team. I’ve already heard hypotheticals about Mahan’s situation. What if this was a major? What if it was the final round? What if it wasn’t his first child? You can debate those questions if you’d like. Mahan would undoubtedly rather hold his new baby girl, knowing fully well that the feeling is a lot sweeter than holding some trophy. – Jason Sobel

Hunter Mahan is blessed with a rare combination of perspective and priority. He will have plenty of chances to win the Canadian Open in his career, but he had only one chance to be by his wife’s side on the day his daughter Zoe Olivia was born. – Rex Hoggard

Hunter Mahan deserves a just reward. He deserves a major. If there’s such a thing as karma, Mahan will be dangerous at the PGA Championship at Oak Hill in two weeks.

Mahan’s decision to walk away from a potential million-dollar payday to be there for the birth of his first child, that’s such a refreshing blast of news in a sports world so skewed by misplaced priorities. Winning and big paydays got trumped by selfless love this weekend. Mahan trumped them. Now, we get to wait and see if cosmic goodwill favors him in some special way professionally. Whether it does or not, Mahan has a baby girl who can look at her father and know he's a winner. – Randall Mell