What We Learned: Rory recovers 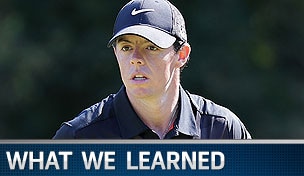 Getty Images
A fan offers a toy squirrel to Amy Mickelson of the U.S. Team on the second hole during the Day Two Foursome Matches at the Muirfield Village Golf Club on October 4, 2013 in Dublin, Ohio. (Photo by Gregory Shamus/Getty Images)  -

Each week, GolfChannel.com offers thoughts on 'what we learned' from the world of golf. In this edition, our writers weigh in on what a high finish in the Korea Open means for Rory McIlroy and the intriguing prospect of taking the PGA Championship overseas.

What a difference a year makes. At this time in 2012, Rory McIlroy was in the midst of being voted PGA Tour Player of the Year and adding its counterpart award on the European Tour, too. We've all been apprised of Boy Wonder's struggles ad nauseam this year, but it's telling that his second-place finish against a third-rate field at the Korea Open will be looked upon as a moral victory. It comes on the heels of Tiger Woods saying he thinks Rory is 'starting to put the pieces together.' That may sound like a cliche from a fellow competitor, but it's also the truth. The signs are there. One year from now, expect McIlroy to be closer to chasing those accolades of last year than searching for more moral victories. – Jason Sobel

This isn’t my father’s PGA of America. The idea the PGA Championship will be played overseas now and again is as radical as it is intriguing. With the PGA of America revealing this week that it is studying the possibility of taking its major outside the United States as early as 2020, there looms a potential spicy new element to the year’s final major. For Australia, China and other nations looking to give a boost to the sport, the PGA of America offers a high-powered vehicle for doing so. There’s intrigue in turning some of the world’s great international courses into major championship venues. – Randall Mell

Maybe there is such a thing as a moral victory. Rory McIlroy’s tie for second place at the Kolon Korea Open, by any measure a second-tier event, may not seem like a reason to celebrate but considering the Ulsterman’s slump this season, his runner-up showing – which tied for his best finish of 2013 – is a reason to be optimistic. And let’s face it, the former world No. 1 hasn’t had that in some time. – Rex Hoggard