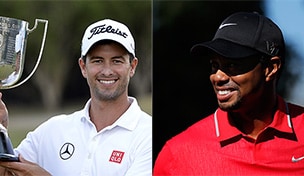 Each week, GolfChannel.com offers thoughts on 'what we learned' from the world of golf. In this edition, our writers weigh in on players peaking for certain events, Adam Scott's homecoming and the European Tour's battle with its players over the Race to Dubai.

Earlier this year, I asked Sean Foley – swing instructor to the stars – how an elite golfer can train himself to peak four times per year. Foley simply laughed and said, "I really don't know." Memories of that comment came flooding back this weekend, as the game's two best players seemed to be peaking three months after the last major championship and five months before the next one. Tiger Woods' title contention at the Turkish Airlines Open and Adam Scott's win at the Australian PGA once again prove that even the best players can't control when their games are going to peak. Not that either one didn't want to play well, but the educated guess here is that they'd each love for their November games to still be around next April.  – Jason Sobel

That Adam Scott has no interest in sentimental homecomings or ceremonial starts. Scott returned home for the first time since becoming the first Australian to claim the green jacket in April and won the Australian PGA to complete the Australian Slam following previous wins at his country’s Open and the Masters. Monday’s headline in The Age (Melbourne) figured it best, “Storming home.” – Rex Hoggard

The European Tour is in a battle with its stars over the Race to Dubai.

With Ernie Els, Charl Schwartzel and other big-name members in a snit over the tour’s rule requiring members play at least two of the first three Final Series events to qualify for the season-ending DP World Tour Championship and bonus pool, the tour has a problem. Els, Schwartzel and Sergio Garcia won’t be playing the season finale because they didn’t meet the requirement.

To build the Final Series, to make it special, the European Tour needs to promote and protect it. The tour’s stars make or break events for the title sponsors. If the stars don’t show up, sponsors won’t want to keep paying up. That’s the problem. You can’t really force stars to play these days with so many lucrative worldwide options. Incentives work better. That’s the quandary the less rich European Tour finds itself in now. Expect the stars to get their way with a rule change. They almost always do. – Randall Mell

The taste of victory can’t be overstated.

The conclusion of the McGladrey Classic was about Chris Kirk, who triumphed by one shot for his second-career win. But it was as much about Briny Baird, who came up short in a manner that you might expect from a player who is now 0-for-365 in his career on the PGA Tour.

Staked to a one-shot lead through 68 holes, Baird had a chance to seal the deal on the par-5 15th. Instead, he watched as Kirk scrambled for par, then turned an eagle opportunity into a par with three disappointing putts. A blundered attempt from the sand on the final hole then found a watery grave.

A pro since 1995, Baird has now amassed more than $13 million in earnings, and earlier this week professed that he would rather have the most money of players without a win than the least money of players with one win. That may have been the case on Thursday, and that still may be the case following Sunday’s runner-up, the sixth of his career.

As Kirk tapped in for the win, though, earning a spot in his first Masters in the process, you have to wonder how much Baird would have paid to trade places with the winner. – Will Gray