What would constitute a Grand Slam for Park? 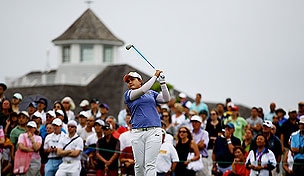 SOUTHAMPTON, N.Y. – This year, for the first time, there are five major championships in women’s golf.

Though a Grand Slam has come to be understood as encompassing four elements in golf, in baseball and even a Denny’s breakfast, the origin of the concept isn’t based on that number.

According to golf historian Martin Davis, a Grand Slam as originally conceived would require winning all the majors played in any given season.

“The term Grand Slam came about in Bobby Jones’ time,” Davis said. “It’s actually a term from the card game bridge. A Grand Slam is when you take all 13 tricks. It means you sweep the table, you win everything.”

Park was asked afterward if she would consider it a Grand Slam if she won the Women’s British Open, or if she believed she needed to win all five majors to claim a Grand Slam.

“I won Evian last year,” Park said. “It wasn’t a major then, but, yes, I still think it is a Grand Slam. Four out of five is still big.”

It figures, the first year the LPGA adopts a fifth major, it makes it confusing, if not harder, on a player trying to make history never made in the game of professional golf.