What you can learn from Rory McIlroy 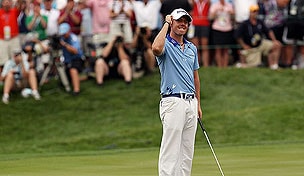 In Rory McIlroy’s dominating performance at the U.S. Open, it’s obvious he did many things better than anyone ever has in the championship’s 111-year history. But if we look back to this performance with 20/20 hindsight, it seems McIlroy’s tournament tromp puts a stamp on multiple tasks that need to be accomplished to realize that goal.

Notwithstanding McIlroy’s awesome display of ability, the reality is there are always mental and physical constants that remain unchanged – constants that always apply and not just to the major championships, but your club championship or heated matches between you and your playing partners.

These following seven constants remained the same for McIlroy at Congressional and, if you can improve your play in these areas as well, you, too will realize success you never thought was possible.

It seems all winners say similar things in their post-game interviews.

“I stayed in the moment.”

These words reverberate with consistency among tournament winners yet all most people here is, “blah, blah, blah.”

To the more informed student of the game, however, staying patient is really allowing your confidence to show up. Rory spoke of being in the moment and not taking anything for granted all week long.

He addressed his failing experience at Augusta as a learning experience to help him learn to hang in there and close the deal. He spoke of executing to the best of his ability and staying in the moment.

He said these things before he started Round 1 at Congressional and maintained this level of focus all four days. These are the kinds of statements golfers make who truly know the importance of focus when they’re playing their best golf. All winners create a level of emotional durability within themselves to persist and hang tough when times and situations look bleak. In other words, they can grind out the tough stretches until the wheels get turning the other way, and they do not allow their emotions and thoughts to create a rut and get stuck.

McIlroy stayed patient and emotionally consistent, and played his game all 72 holes of the championship. Do the same you’ll be pleased with the results.

All told, when you ask any tournament veteran what really separates the winners, they unanimously seem to say they rolled their ball well, but made all of the “makeable” putts when they presented themselves. That is, the ability to sink the 3- and 4-foot putts for par or bogey that allow a round to sustain positive momentum.

Often, a 4-foot par putt can create confidence and even create a springboard of positive feelings that generates psychological momentum for the next series of shots and holes.

McIlroy putted with decisiveness and control at the U.S. Open and made more than the lion’s share of the 3- and 4-footers necessary maintain his momentum and sustain confidence.

It is important to remember that it isn’t the big shots that make or break champions, but the ones close to the hole that separates the winners from the losers.

If you don’t believe it, just ask McIlroy. Or even second-place finisher, Jason Day. Day ended the tournament with his second consecutive major championship runner-up finish because of a gritty final-day performance during which he made every putt within 10 feet.

Learn from this, fall in love with practicing and making the short ones, and you’ll maximize the lowest score possible in every round you play.

3.  Driving accuracy and greens in regulation

Nowhere was it more evident in McIlroy’s domination than his repeated long drives in the middle of the fairway. The Northern Irishman drove the ball more consistently and hit more greens in regulation (86 percent) than almost anyone has ever done in the U.S. Open since the U.S. Golf Association started keeping official statistics nearly 30 years ago.

The combination of his length and accuracy further allowed McIlroy to hit a high percentage of greens, which thus allowed him attack difficult pins and play offensively.

The lesson to be learned here is simple: If you want to play golf well and make the rest of the game easier, understand that when you place the first domino in position, the rest follow much easier. So, if you can understand your driver can be an accuracy club as well as a distance club, you’ll like how the dominoes fall.

Winners have great speed and distance control with all putts. When you are having a 30- or 40-foot putt and you leave it stone dead near the hole, it makes for a much less stressful next putt. But if you leave yourself enough of those 4- to 5-footers, it’s just a matter of time that you miss one, then two, and before you know it, missing them all and your confidence dissolves.

If you want a bearing on how well McIlroy putted the long ones at Congressional, on the 72nd hole – a 75-footer from the front of the green, with difficult slopes and breaks to negotiate – he rolled it to three inches.

When you putt like that, and do it all week long, whatever you’re participating in will ultimately be yours.

Championships are usually won by a player who avoids the unnecessary high number or wastes his scoring opportunities with excessive penalty strokes.

Nothing is more upsetting or unsettling than a mental and physical error that results in, not only a poor shot, but a shot penalized with extra strokes and a loss of distance (such as a ball out-of-bounds or in the water).  McIlroy experienced this on the last hole of his second round, where he made double-bogey.

The lesson you must learn is that no matter how well you may play, the challenge of the game may jump up and bite you. The trick is not to get overwhelmed or eaten. Rory met the challenge, shook off the demons of the final hole in the second round and continued his great play into the rest of the week.

6.  Tournament golf is “cash on the line” playing

In golf, no lead is ever safe or too big – you always want to go lower and deeper. Essentially, this is how to dominate and this is what Rory McIlroy did all week at the U.S. Open.

The game is basically a ‘pay-as-you-go’ proposition, which means you cannot just make birdies and pars, deposit them into your golfing bank and expect to earn interest or feel your strokes are safe from inflation, depression, or bad shots.

In golf, you always have to be moving forward. Each shot is a stroke you create and although we like to stockpile as many birdies as we can in our running total, you have to remember any lead can dissolve quicker than smoke through a keyhole.

McIroy learned this from his Augusta experience and kept his mindset aggressive the entire week – especially during the final round. It is important to realize you have nothing until the final putt is holed and you have signed your scorecard. McIroy did this shot after shot until he was done and has his hands on his first major championship trophy because of it.

Moving forward and not trying to protect your collection is how great champions are made.

7. Emotional bounce back (letting go of past mistakes and moving forward)

Perhaps what we can learn most from our new U.S. Open champion is that past mistakes do not have to predict or influence the present situation.

Every time you tee it up in a tournament, it is a new performance, a new day and a new opportunity to display your talent. Past failures are just that: performances in the past; history that cannot be changed. All you have is the present and if you learn from past failings to influence your present moments, you will moving into a positive growth situation.

Rory McIlroy took this thought to heart and displayed a great bounce-back victory in his first major since his final-round 80 after leading through 54 holes of the Masters.

McIroy had always maintained he was not emotionally scarred by that, and was consistent in expressing to the media he had learned a major lesson in closing the deal in important tournaments. His record score of 16-under 268 at Congressional proved he was able to compartmentalize Augusta and move into the present.

All golfers can learn this most important lesson: Let go of your past failures and move your mind and attitude into a more promising present and future.