Who has the best WGC-Match Play record? 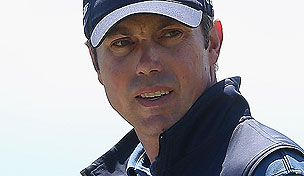 We know what you’re thinking: Past records don’t mean much in 18-hole match play.

But hey, there’s no such thing as having too little information when filling out your brackets. We’re here to help.

These are the 11 players with the best winning percentage at the WGC-Accenture Match Play Championship (note: 10-match minimum):

Notes: The cold-blooded competitor lost in semifinals in 2011, reached quarterfinals in 2012 and won the event in 2013

Notes: Reached the finals in back-to-back years, winning it all in 2012 and losing to Matt Kuchar in 2013 championship match

Notes: Never had a first-round exit, lost in the semifinals in 2013 to eventual champion Matt Kuchar

Notes: The 2011 champion hasn’t fared as well lately, losing in the opener in 2012 and dropping a second-round match a year ago

Notes: The former world No. 1 has reached at least the second round in all but one year (2013). Two years ago, he lost the final match to Hunter Mahan

Notes: The 2010 champion lost in the first round in both 2011 and 2012, but he returned to his winning ways a year ago when he reached the semifinals

Notes: The 2007 champion also reached the semis in 2008, but he hasn’t found Dove Mountain to his liking, bowing out in the first round in each of his past four appearances

Notes: The 2011 finalist has followed up that performance with back-to-back Round of 16 appearances

Notes: Last week's winner has reached at least the second round in each of the past three years, including a semifinal appearance in 2011

Notes: Quietly consistent record in this event, with three consecutive Round of 16 appearances from 2010-2012 before a second-round loss a year ago

Notes: The 2001 Match Play winner had some lean years after that, but he has shown his match-play prowess in 2012 and ’13, reaching the Round of 16 and quarterfinals, respectively