Who will be the breakout star and biggest letdown of 2012? 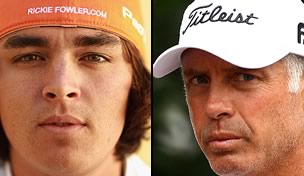 Early January is a time for optimism for all professional golfers. But the year won't work out the same for everyone. Some players will experience greatness, while others will endure bitter disappointment. We asked our senior writers to identify a breakthrough star and, conversely, a player who will be the biggest letdown in 2012.

Rickie Fowler is the man.

Yeah, there are folks who believe he’s showered with too much hype, who think his game isn’t well rounded enough to win the biggest events, but it’s hard to bet against Fowler’s heart, attitude and confidence. He strikes you as the kind of player who’s going to find a way because he approaches the game in so many right ways.

Fowler just turned 24, but he already has four second-place PGA Tour finishes on his resume. He’s ranked No. 32 in the world. He’s still learning his craft, but he’s got too many intangibles not to keep improving.

Steve Williams is the man.

Woods’ former caddie was in the spotlight a lot last year, but unless he keeps running his mouth, his odds of being as relevant as he used to be depends on the continued resurgence of his current boss, Adam Scott. If Scott doesn’t take the next big step, Williams likely goes another year without being involved in a major championship victory.

Stars aren’t born. They are made – through thousands of hours of practice and repeatedly successful results. That doesn’t mean some athletes don’t possess a certain innate star quality, though.

Gary Woodland has that star quality. He looks like the type of guy who’s savvy enough to date the Homecoming Queen, but smart enough to ace every test – without studying.

He can also play a little golf, which shouldn’t hurt the persona, either. In his first full season on the PGA Tour last year (his rookie campaign was shortened because of injury), Woodland bashed his way to a victory and five Other top-10 finishes. Not bad, but here’s the part that should have us intrigued: He’s still learning. Last year, his short game was still a work in progress, as he ranked 114th in total putting. With more focus on that part of his game, expect much better numbers – and results – this season.

Picking a player for “biggest letdown” isn’t quite as easy. Check out the top 25 in the current OWGR and there are very few – if any – whom you’d sell short if you owned stock in ‘em.

I’ll stay near the top of that ranking, though, and pick Lee Westwood. The world No. 2 will turn 39 just after the Masters and every year that goes by without a major championship victory is a wasted opportunity. Westwood has come so close so many times, but you’ve got to wonder if he’s destined to be Colin Montgomerie 2.0 – a top-level talent who could never claim the big one.

Sure, other elite players are without major hardware, too, but none would be as big a letdown if they didn’t win. Luke Donald and Dustin Johnson are younger and still have more time. Steve Stricker, quite frankly, has never been the ball-striking talent that Westwood has been.

If he fails to win a major this year, Westwood will hardly be out of time, but the clock is ticking. It’s been a letdown so far that he hasn’t gotten one, and that letdown could only be extended this year.

Seems about right that the search for the year’s breakout star and biggest letdown would send one to the extremes of the professional talent pool.

Look no further for the next big thing than in Jupiter, Fla., the same south Florida enclave that is home to last year’s breakout talent Keegan Bradley. Jamie Lovemark’s rookie campaign was cut short by back surgery after just nine events in 2011, but the 2010 Nationwide Tour Player of the Year has all the markings of a star in waiting and seems fully recovered after a year on the DL.

As for the season’s biggest disappointment a candidate for the 2011'letdown' award appears poised to close the deal.

After his victory at the Shell Houston Open Phil Mickelson had just four more top-10 finishes the rest of the way, slumped to 14th in the world golf ranking and did little late in the year to make one believe his fortunes were trending for the better. He was 33rd at the Singapore Open and despite a 3-1-0 record at the Presidents Cup he failed to take on the veteran leader role he’d held in recent matches.

In fairness to Lefty, the psoriatic arthritis he was diagnosed with in 2010 seems to still be an issue and his once-unflappable short game has been derailed by a putting stroke that drove him to a belly model late last season. Whatever the reason, it has been a disappointing performance by any measure and that will continue.