Who will win the 140th Open Championship? 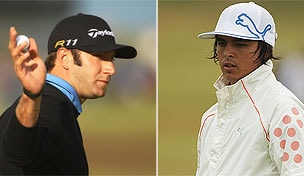 With one round remaining, who will win the 140th Open Championship? GolfChannel.com editorial director Jay Coffin and senior writer Jason Sobel weigh in with their picks.

SANDWICH, England – I’m not a big believer that golf owes anyone anything. But if it did, Dustin Johnson deserves a major championship.

It’s hard to wrap my mind around Johnson winning the Open Championship, his game seems more suited to win a U.S. Open or a PGA Championship, both of which he had within reach last year. But he’s played well enough to be a shot out of the lead and he’s in the final pairing with Darren Clarke.

Anyone within five shots of the lead has a chance to win. There is too much talent in the top group for someone to come from out of the pack. Johnson has the most talent from the group.

Using process of elimination, Clarke, Thomas Bjorn and Miguel Angel Jimenez don’t seem like they can hang around. That leaves Johnson, Rickie Fowler, Lucas Glover, Anthony Kim, Phil Mickelson and Martin Kaymer as next in line.

Clarke may be destined to win. In case you’ve been living in a cave, players from Northern Ireland have won two of the last five majors. Clarke could make it three of the last six. Kaymer scares me a little, too. He obviously has the goods, but he’s four behind Johnson.

Johnson is going to win majors, plenty of them. The first will be the Open Championship, which was the last one I thought he’d win.

Buckle up, golf world. Get ready for it, because the future is now. One month after Rory McIlroy won the U.S. Open, he’s about to be joined in the society of major championship winners by fellow 22-year-old Rickie Fowler.

Why is the young American primed to win? I could tell you about his great feel for the game, his ability to play well under pressure, the karma of trying to win for his recently deceased swing instructor or the fact that at 2-under 208, he’s just three shots back and one of only a half-dozen players in red numbers entering the final round.

Instead, I’ll tell you about how he’s following in Rory’s footsteps.

After leading The Masters entering the back nine on Sunday, only to finish T-15, McIlroy put on a happy face and said, “This is my first experience at it, and hopefully the next time I'm in this position I'll be able to handle it a little better.”

Granted, it was a smaller event and therefore less disappointing, but Fowler’s words after losing the recent AT&T National were eerily familiar: “Just a tough day, but I learned a lot. It was great to be in that position. You know, it's good to see what other guys do in the same situation and how they handle themselves.”

Too often we consider final-round disappointment to be a negative. Really, these are positive experiences which can help a young player mature. Much like we witnessed from Rory last month, that process will come full circle for Rickie on Sunday.