Whole Korda family out to watch Nelly, Jessica at Open 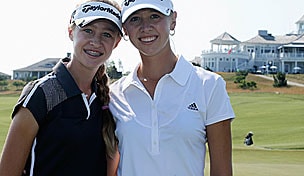 SOUTHAMPTON, N.Y. – Nelly Korda, the youngest player in this U.S. Women’s Open at 14, made the cut with Saturday morning’s completion of the suspended second round.

It’s a big weekend for the Korda family. Jessica, 20, Nelly’s big sister, is tied for fifth going into the third round.

Nelly made the cut with some drama involved Saturday morning. Nicole Jeray made a double bogey at the 17th hole and bumped the cutline to 6 over par, bringing eight more players into the weekend. The cut is to the low 60 and ties. Jeray stepped to the 17th tee among exactly 60 players at 5 over par. Korda was among those players at 6 over hoping to make the cut. She got her wish when the cut line moved.

Nelly and Jessica are daughters to Petr Korda, a former Czech Republic tennis star who won the 1998 Australian Open. Their mother is Regina Rajchrtova, who was once the 25th ranked women’s tennis player in the world.

Petr is caddying for Nelly this week. Regina and Sebastian, the 12-year-old little brother to Jessica and Nelly, are walking 36 holes a day. Some aunts and uncles are also in tow. The whole family is staying together. Jessica said she’s loving the experience even more than she thought she would.

“I thought it would be chaotic in the house, but it's not at all,” Jessica said. “I think it helps that we were on opposite sides of the wave, but it’s really nice to have everybody here. It feels really good. I know that you can't have it every week, but I'm really glad that everybody could come. It means a lot that everybody came out to watch and support us this week.”