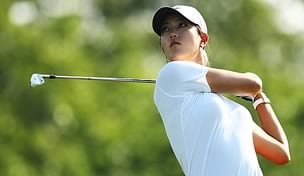 The International Olympic Committee announced Monday that Wie has been appointed its Youth Olympic Games ambassador.

Before golf becomes part of the Olympics at Rio De Janeiro in 2016, it will be played at the 2014 Nanjing Youth Games in China. Wie, 24, will have a significant role in shaping the unfolding of that event. She will be featured in a series of Youth Olympic Game videos.

“I feel so honored to be part of the Youth Olympic Games,” Wie said in a release. “I’m hoping to teach young people to have fun with their game, to be competitive, to really want something and to realize the importance of having a dream.”

Wie said she is aiming to qualify for the 2016 Olympics in Rio De Janeiro.

“I went to the London Olympic Games last year and that really got me inspired,” Wie said. “It got me motivated and I'm going to do everything I can. It's one of my biggest focuses, making the American team for Rio.”