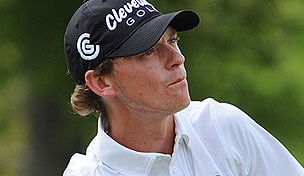 Getty Images
GLEN ALLEN, VA - APRIL 25: Henrik Bjornstad (2R) of Norway stands with Tyler Aldridge (2L) and caddies as they watch David Mathis's tee shot on the eighth hole during the second round of the Henrico County Open of the Nationwide Tour at The Dominion Club April 25, 2008 in Glen Allen, Virginia. (Photo by Chris Gardner/Getty Images)  -

Will Wilcox fired a 12-under 59 Sunday in the final round of the Utah Championship, becoming the fourth player in the history of the Web.com Tour to card golf's magic number.

Beginning on the 10th hole, Wilcox started with four straight birdies, adding a fifth birdie at No. 16 and an eagle at the par-5 17th. He added three more birdies on holes 2-4, closing his round with a pair of birdies on Nos. 8-9 to match the lowest round ever shot on the Web.com Tour.

Despite starting the day tied for 38th, Wilcox moved into a tie for the lead at 21-under 263 upon signing his scorecard. It's not the first low score this week at Willow Creek Country Club, as Chad Collins fired a second-round 60 after a first-nine 27.

Wilcox, 27, from Birmingham, Ala., joins Doug Dunakey, Notah Begay III and Jason Gore as the only players to card a 59 on the Web.com Tour. Gore was the last to do so, shooting the ultra-low round en route to winning the 2005 Cox Classic.