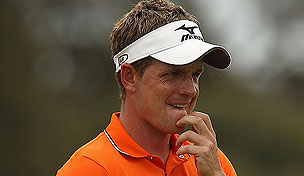 Getty Images
LAS VEGAS - OCTOBER 17: Aaron Baddeley chips out of the greenside bunker on the 17th hole during the third round of the Justin Timberlake Shriners Hospitals for Children Open at the TPC Summerlin on October 17, 2009 in Las Vegas, Nevada. (Photo by Marc Feldman/Getty Images)  -

Luke Donald assumed the world No. 1 ranking in May after beating Lee Westwood in the BMW Championship at Wentworth. Donald completes 2011 with 31 consecutive weeks as world No. 1 and apart from Tiger Woods, Donald now holds the longest stretch at the top spot since Greg Norman’s 96 weeks from 1995 to 1997. But 2012 is a new year with plenty of talented players hot on Donald's heels. Will anyone top Donald for the No. 1 spot in 2012? GolfChannel.com senior writers Jason Sobel, Randall Mell and Rex Hoggard weigh in with their thoughts.

As I gaze into my crystal golf ball, I foresee that exactly one year from today the No. 1 player in the world will be … Luke Donald.

I know, I know. Not exactly going out on a limb to maintain that the status quo will persist for the next 12 months, but there are a few major factors in play here – and they all favor Donald.

First is the fact that Donald turned into Mr. Consistency this past year. Long known as an underachiever, he won a combined four titles on the PGA and European tours. Just as important as far as his OWGR status is concerned, though, he was a top-10 machine. In fact, Donald finished in the top 10 more times than he didn’t. Pretty amazing feat, considering most of his tournament starts come against elite fields.

Next is the fact that professional golf has now reached an apparent age of parity. Since the beginning of 2009, the 12 major championships have seen 12 different winners. No player won more than two PGA Tour events this year. And certainly nobody is dominating. That all bodes well for Donald.

The last factor comes down to everybody’s favorite subject – math! The OWGR uses a two-year rolling calendar and while Donald will continually lose points for his strong 2011 season, they will remain on his ledger for the entirety of 2012, making it more difficult for him to tumble from the top.

Rory McIlroy and Lee Westwood aren’t too far behind, and Tiger Woods and Sergio Garcia should each make a serious run at it, but I see Luke Donald remaining as the No. 1 player in the world for at least another 52 weeks.

Rory McIlroy is positioned to make a run at taking the No. 1 ranking from Luke Donald, but it won’t come without a scrap.

Donald comes off as the perfect English gentleman, but he’s intensely protective of his top ranking, like a bulldog with a tight bite on it.

No. 5 Newsmaker of the Year: Luke Donald

Donald will end the year atop the Official World Golf Ranking for 31 consecutive weeks. That’s more than Lee Westwood (22 weeks) and Martin Kaymer (8 weeks) held it combined before Donald took over.

Listen to Donald, and you hear how he believes he’s the best player in the game today. He seems to be fueled by all his skeptics. Winning the money titles on both the PGA and European tours, winning four times worldwide, finishing top 10 practically every week he tees it up, Donald is emboldened with more confidence than he has ever had.

And Donald’s beginning to do what you expect a No. 1 player to do. He didn’t back into the top spot. He seized it winning the BMW Championship last May. He won the PGA Tour money title and PGA Tour Player of the Year honors winning the Children’s Miracle Network Hospitals Classic in a dramatic Sunday charge.

Donald, of course, has a gaping hole in his No. 1 resume. He’s still looking for that first major championship title, and this is where he’s vulnerable to McIlroy.

McIlroy has shown a knack for getting his game ready for the strongest fields in the biggest events, the majors. Though just 22, he has already claimed one, last year’s U.S. Open. And he has already finished T-3 or better in four majors.

At 34, Donald has just two top-three finishes in majors. The respect he craves is tied to winning a major, and if McIlroy beats him to another one at the Masters, McIlroy will likely be perceived as the top player in the game today, regardless of whether McIlroy is actually ranked No. 1. Of course, there’s that guy named Tiger Woods, who changes the conversation if he builds on the Chevron win and gets hot again.

Although he’s not the “it” pick and will only spark more World Golf Ranking hand wringing if it happens, but the guy who Luke Donald unseated to ascend to the top of the world order is the most likely candidate to reclaim the No. 1 ranking.

In the frenzied ranking debate Lee Westwood has become something of the cellophane man, out of sight and largely out of mind. But if anyone is going to topple Donald it is his fellow Englishman who has the best chance.

Most-read stories on Golfchannel.com in 2011

Westwood – who took over the top spot last fall and hasn’t ranked outside the top 10 since October 2009 – closed the year with victories in Thailand and South Africa to clip McIlroy for the year-ending runner-up ranking and will continue to play a schedule that will only pad his OWGR resume.

Over the last two years, Westwood has six worldwide victories, although just one on the PGA Tour, and three missed cuts in 45 starts.

Majors may be the ultimate benchmark in golf, but the World Golf Ranking rewards global consistency and, after Donald, no one does that better then Westwood.