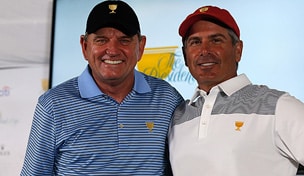 DUBLIN, Ohio – Tuesday’s press conferences at the Presidents Cup felt almost like an early-week injury report in the NFL.

For International captain Nick Price his focus is on Louis Oosthuizen, who has been slowed by a back injury and missed the cut last week at the Dunhill Links Championship, his first start since missing the cut at the Open Championship in July.

“The leg was the biggest problem not finishing a round of golf walking-wise, but that seems to be good now,” Oosthuizen said. “The back is still not 100 percent but I can play with it. Health's not an issue. Just need to get the game sharp.”

Similarly, U.S. captain Fred Couples found himself answering questions concerning Zach Johnson, who arrived at Muirfield Village a day late after a bout with what he called, “a 24-hour bug.”

“I feel fine. Not 100 percent but I am really close and the sickness is gone,” Johnson said. “Now it’s just the energy. Laying in bed for 20 hours my back hurts right now, but I’ll be fine.”

A captain can replace an injured player until 6 p.m. on Wednesday with another captain’s pick. After that, however, the team would have to play a man short. The two alternate-shot matches would be conceded, the two four-ball matches could be played with two players against one and the singles match would be halved.