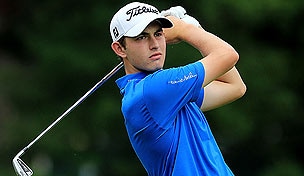 He's still making us marvel, even in practice rounds.

Patrick Cantlay, the amateur sensation who doesn’t turn 20 until next month, delighted fans with his unusual shot making in a practice round in preparation for this week’s Northern Trust Open.

Cantlay, a sophomore at nearby UCLA, is playing this week on a sponsor’s exemption. It’s a big deal because the NCAA Championships are also scheduled for Riviera in June.

This marks the start of a big year in big professional events for the world’s top-ranked amateur. Cantlay is also set to play in the Masters, U.S. Open and British Open with some other PGA Tour invites sure to follow.

“I whiffed one in the bunker,” Cantlay said.

Cantlay was the Jack Nicklaus National Player of the Year for collegiate golf last year. He recorded four top-25 finishes in PGA Tour starts, setting the course record with a 60 at the Travelers Championship at TPC River Highlands. He was low amateur at the U.S. Open and runner-up at the U.S. Amateur.

While Cantlay was resolute last year that he will finish out his collegiate career at UCLA, he’s less so now. He says he’s undecided now and just focusing on this season.