Will St. Andrews be a tonic for Tseng? 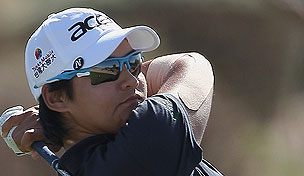 While Rolex world No. 1 Inbee Park marches toward more history next week at the Ricoh Women’s British Open, former No. 1 Yani Tseng heads to St. Andrews looking to end her quiet slide.

Tseng unceremoniously slipped two spots to No. 12 in the Rolex world rankings this week, marking the first time in more than five years that she isn’t among the top 10 in the world. She moved down after missing the cut last weekend at the Marathon Classic, her third consecutive missed cut.

Tseng first cracked the top 10 in the world rankings on June 9, 2008, after winning the LPGA Championship, her first LPGA title. She seized the world No. 1 ranking on Feb. 14, 2011, holding the top spot for 109 consecutive weeks before Stacy Lewis took it away on March 25 of this year. Tseng has steadily slipped in the rankings over these last four months.

“There’s a lot of pressure she’s feeling trying to perform because she has played so well in the past,” Gary Gilchrist, Tseng’s coach, told Golfchannel.com. “She likes the Open, so I’m hoping this will be a turning point.”

When Tseng won the Kia Classic in March 2012, it was her 15th worldwide title in less than 15 months. She hasn’t won anything since. She looked invincible running up a monstrous lead in the world rankings on her run, but she has struggled of late to find her old confidence.

“It’s a funny game,” said Gilchrist, who plans to meet with Tseng at St. Andrews next week to resume preparation for the Women’s British Open. “Golf, to me, is like a relationship. For whatever reason, golf isn’t Yani’s best friend right now.”

In a run of poor play on some really tough courses last summer, where Tseng went 12 consecutive rounds without breaking par, her confidence was dented. She admitted feeling the weight of expectations to perform at a high level. She confessed feeling the burden that comes with a No. 1 ranking and being sensitive to criticism of her struggles.

“I really cared about world No. 1, and the people behind me, and whether they were going to catch me,” Tseng said at the LPGA Founders Cup back in the spring, just before losing her No. 1 ranking. “I looked at media, what fans were saying, and it just drove me crazy.”

Tseng said she was prepared to lose the No. 1 ranking before Lewis actually seized it from her.

Gilchrist believes Tseng’s struggles grew worse with her growing discomfort with the No. 1 ranking.

“When she is feeling more pressure, she gets more aggressive with her game.” Gilchrist said. “Her tempo gets really, really quick, and she swings harder and harder at it. Technically, sometimes, she will overswing, but her technique has never been orthodox. She’s always had her own swing and been able to trust it and manage it.”

Gilchrist believes the troubles aren’t so much technical issues in her swing as they are issues in the mind and heart.

“There were some outside issues there, but now she has to find what it is, within her, that really wants to play good golf. I’m not sure she really, really knows what she wants.”

Gilchrist believes St. Andrews could be a good tonic for Tseng, who has been wayward this year, struggling to hit fairways and greens. She is 150th in driving accuracy, barely hitting more than half her fairways. She is 91st in hitting greens in regulation. She’s 15th in putts per greens in regulation.

“At the end of the day, there’s been a lot of pressure because she hasn’t been performing,” Gilchrist said. “That’s been tough on the team, but her overall attitude has been amazing. She wants to turn this around.”