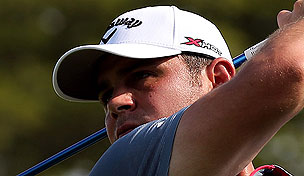 Gary Woodland and Ryan Moore will have to wait a little longer to see which player will capture his third career PGA Tour title.

Both players finished at 14-under 274 at the CIMB Classic in Malaysia but were unable to begin the sudden-death playoff because of darkness. The final round at Kuala Lumpur Country Club was twice delayed by inclement weather – including a suspension that lasted 3 hours, 5 minutes – and the flood lights were on as both Woodland and Moore played the par-5 18th.

The playoff will begin at 7:30 p.m. ET Sunday and will be broadcast live on Golf Channel.

“It was just tough,” Woodland said afterward. “We’ll get a good night’s sleep and come back tomorrow.”

Vying for his second win in the last 12 weeks, Woodland had a one-shot lead with four holes to play, but Moore birdied the par-4 16th to draw even.

On the 18th, Woodland (69) had a 12-footer to win, but his birdie putt snapped off in front of the hole and missed low.

“I hit it where I wanted to,” he said, ‘it just broke a little more than I thought.”

Moore, meanwhile, laid up in the thick, wet rough with his second shot, and he needed to get up-and-down to force the playoff.

When asked how he felt over the 4-footer for par, Moore (70) smiled and said, “Less than fantastic, I’ll tell you that much. Any time you face a putt you know you have to make, it makes it that much harder. You just try and step up and hit it just like you normally do.”

Chris Stroud, playing in the same group, needed to make birdie on the final hole to join the playoff, but his birdie chip just slid by on the right. He finished in a tie for third with Kiradech Aphibarnrat.

Aaron Baddeley was solo fifth after a final-round 66, while Jimmy Walker, a winner two weeks ago at the Frys.com Open was sixth.

Phil Mickelson dropped to T-19 after a closing 74.