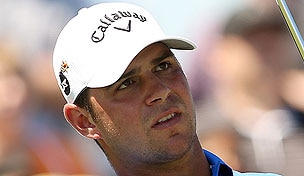 Getty Images
PONTE VEDRA BEACH, FL - MAY 15: Steve Stricker hits his tee shot on the fifth hole during the final round of THE PLAYERS Championship held at THE PLAYERS Stadium course at TPC Sawgrass on May 15, 2011 in Ponte Vedra Beach, Florida. (Photo by Sam Greenwood/Getty Images)  -

ATLANTA – As anticlimactic as Sunday’s final round is setting up to be at the Tour Championship, there are still a few races worth noting going into the final round of the 2013 season.

One involves Gary Woodland, who is tied for 10th at the finale, nine strokes out of the lead, but can solidify his fall schedule with a good finish on Sunday. Woodland is trying to play his way up the FedEx Cup points list to secure a spot in the WGC-HSBC Champions event in October.

The top five players on the season-ending FedEx Cup points list who are not already exempt into the field qualify for the World Golf Championships event in China next month.

“I knew I had to play well. I think I was in (the top five) two weeks ago and fell out last week. I know if I go out and play well tomorrow I’m in,” Woodland said. “I came here to win and the next goal is getting in the HSBC. I’m going to play Malaysia anyway, so I’ll be over there.”

Woodland is currently projected at 16th on the list and would likely need to move up four or five spots to qualify. The 2013-14 season will be the first time winnings and points earned at the HSBC and CIMB Classic in Malaysia the week before will be considered official.