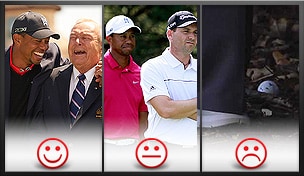 Getty Images
“The hardest part is over. It was everything I thought it was going to be. I was standing there ready to go and then I heard Lusi and I had to give her one last kiss. It was the best part.”– Jarrod Lyle, on his emotional return from a second bout with cancer at this week’s Aussie Masters. Lyle teared up before his opening tee shot.  -

Tiger Woods won five times in the 2013 PGA Tour season, but none of them were majors.

Woods almost shot a 59 in the second round at the WGC-Bridgestone (eventually settling on 61), but he also shot his worst nine-hole total of his professional career (44) at the Memorial – a tournament he has won five times in the past.

That seemed to be the story of Woods' season – highs and lows and everything in-between.

Here's a look at the season that was: the good, the bad and the ugly. Click here or on the image below to view the gallery.