Woods ailing in both body and mind 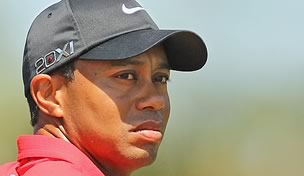 When Tiger Woods won the U.S. Open at Torrey Pines on practically one leg in 2008, it looked like nothing could stop him in his quest to break Jack Nicklaus’ record for major championship triumphs.

The strength of Woods’ mind, it seemed, could even overcome a broken body.

With Tuesday’s news that Woods will miss the U.S. Open at Congressional while healing from his latest knee and Achilles injuries, you can’t help wondering about Woods’ psyche as much as you wonder about his body.

The setback is another mental blow in a series of punishing blows the last 19 months.

This injury has to add to his internal bruising.

While public sentiment is turning against the idea Woods will break Nicklaus' mark, I’m not discounting he’ll still do it. We’ve seen him defy monster odds too many times to dismiss the possibility he’ll defeat them again.

Woods, however, has to beat more formidable foes now than he’s ever beaten before. He has to beat the growing demon doubts in his head. And he has to heal physically to have a chance to win that battle.

I’ve written this before, and I’ll repeat it because it’s more relevant now than ever. Woods, for the longest time, struck me as the most confident human being on the planet, a guy who didn’t have an uncertain cell in his body. Now? He must feel like he's managing the Indy 500 in his head with all the uncertainties whirling around in there.

This latest news adds to the army of demon doubts and uncertainties lining up against Woods. It stiffens the challenge for a guy who’s always specialized in slaying foes in spectacular fashion.