Tiger's co-leads with Rock after 66 on Day 3 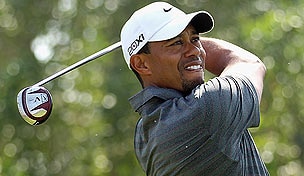 ABU DHABI, United Arab Emirates – It’s a snapshot that was once so prevalent in golf that it was almost mundane, but now – two years removed from his last official victory of any kind – Tiger Woods perched atop a 54-hole leaderboard qualifies as a distinct happening.

With a swing that looks more effortless with each round Woods moved atop the Abu Dhabi HSBC Golf Championship with a third-round 66, his second bogey-free effort this week and his first 54-hole lead since the 2010 Chevron World Challenge.

“It didn’t seem like I did a lot of things right, but I didn’t do a lot of things wrong either,” said Woods, who is tied with Robert Rock at 11 under and will be paired with him and Peter Hanson on Sunday going off at 11:45 a.m. local time, 2:45 a.m. EST.

Woods took a share of the lead with a birdie at the par-5 10th hole, just his second birdie of the week on Abu Dhabi Golf Club’s par 5s , and sealed his spot in the final group with a two-putt at the last.

Rory McIlroy is among a group of four players tied for second place at 9 under after a third-round 68.

You can catch final-round coverage of the Abu Dhabi HSBC Golf Championship live Sunday on Golf Channel from 3-8 AM ET.