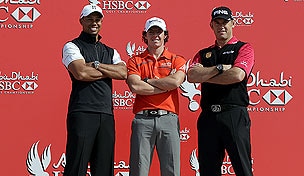 Getty Images
CRANS, SWITZERLAND - SEPTEMBER 05: Miguel Angel Jimenez of Spain plays his second shot on the 12th hole during the second round of the Omega European Masters at Crans-Sur-Sierre Golf Club on September 5, 2008 in Crans Montana, Switzerland. (Photo by Andrew Redington/Getty Images)  -

Though Tiger Woods did not win in Abu Dhabi on Sunday, he did crack the top 20 in the Official World Golf Ranking. Woods improved from No. 25 to No. 17 with his T-3 finish in the emirate.

There were no other changes to the top 10, but Graeme McDowell improved two spots to 11th.

A win was a win for Brandt Snedeker, who took the Farmers Insurance Open in a playoff when Kyle Stanley made a disastrous triple bogey at the 72nd hole. With his second win in the space of a year, Snedeker is now No. 13 in the ranking.

Stanley would have moved into the top 64 with a win at Torrey Pines, but instead is in at No. 87, still a vast improvement from 150th.

With his T-13 finish at Torrey Pines, Ryo Ishikawa moved up one spot. Once again at No. 50, he sits – and hopes to stay – on the right side of the Masters bubble.