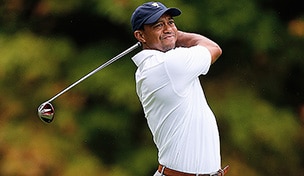 Getty Images
From a fairway bunker, Derek Bohlen tries his best to hit a great shot on Big Break Greenbrier.  -

Tiger Woods and EA Sports have decided to part ways after more than 15 years, the video-game company said in a statement Monday.

Instead, EA Sports is working on a next-generation game that is currently in development.

“We’ve always been big fans of Tiger and we wish him continued success in all his future endeavors,” Daryl Holt, the vice president and general manager of golf at EA Sports, wrote on the company’s website. “Moving forward, we will continue to work with the PGA Tour exclusively to create groundbreaking golfing titles and our partnership remains strong.”

The final edition of the series was Tiger Woods PGA Tour 14, in which Woods shared the cover with a young Arnold Palmer. The first game was released in 1998, the year after Woods won his first major title.