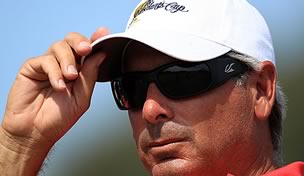 Tiger Woods believes two-time Presidents Cup captain Fred Couples would make a great leader of the American Ryder Cup team in 2014 and beyond.

In a year-end post on his website, Woods commended Couples' style in leading the U.S. side to a victory at Harding Park in 2009 and a successful defense at Royal Melbourne last month.

'I've heard people question whether Fred would be a good Ryder Cup captain, and I just don't get it,” Woods said. “I think that Fred is a great captain. Whether it's The Presidents Cup or the Ryder Cup, it doesn't matter.”

'The way he keeps us loose and how much fun we have – it's just great to play for him. He's a lot more competitive than people realize. He just doesn't show it. He shows it with us around, but the public doesn't see it.'

Couples was lauded at Royal Melbourne for his ability to keep the stress level low in the team room. His laid-back style was endorsed by his charges as likely being effective in the more fierce rivalry with Europe.

Couples has not been asked to help any Ryder Cup captain, including 2012 head honcho Davis Love III. Couples could be captain in 2014, when the Ryder Cup is contested at Gleneagles in Scotland. An American victory there would be its first on foreign soil in 21 years.