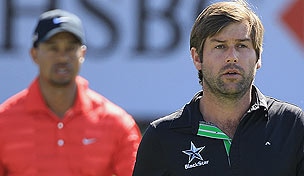 Getty Images
DUBAI, UNITED ARAB EMIRATES - NOVEMBER 22: Lee Westwood of England tees off on the 14th hole during the final round of the Dubai World Championship and the Race To Dubai on the Earth Course, Jumeirah Golf Estates on November 22, 2009 in Dubai, United Arab Emirates. (Photo by Andrew Redington/Getty Images)  -

Robert Rock won the Abu Dhabi HSBC Golf Championship on Sunday by two shots over Tiger Woods and one shot over Rory McIlroy. It is his second European Tour win.

Rock finished at 13 under after closing with 2-under 70.

Beginning the day tied with Tiger Woods, Rock matched Woods with two birdies in the first three holes. When Woods made consecutive bogeys at the fourth and fifth of Abu Dhabi GC, Rock had a lead he would not relinquish.

Woods shot even-par 72 on Sunday and finished T-3 with Thomas Bjorn and Graeme McDowell on 11 under.