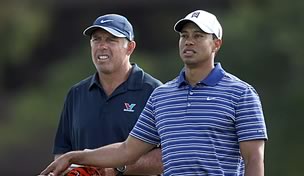 When Steve Williams was spotted at Congressional CC on Saturday on the bag of Adam Scott, a lot of questions naturally surfaced about the nature of the gig. Did it mark a break-up of Woods and Williams, or was it just a one-time deal?

According to Woods’ agent Mark Steinberg, Tiger gave Williams the all-clear on caddying for the Aussie at next week’s U.S. Open.

Speaking by phone, Steinberg said, “Steve and Adam are friends, so they have a relationship. Adam had the bag open for the week and Tiger gave Steve the okay to do it.”

Steinberg said Williams is just as competitive and driven as his regular boss, ”Stevie is just like any other athlete. He didn’t want to miss a major.”

Woods and Williams have been working together since 1999 and have combined to win 13 of Woods’ 14 major championships.