Woods in mix after 'most complete round of year' 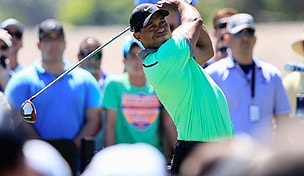 Getty Images
AUSTIN, TX - MARCH 23: Lee Westwood of England (L) and Sergio Garcia of Spain watch a tee shot on the sixth hole during the first round of the World Golf Championships-Dell Match Play at the Austin Country Club on March 23, 2016 in Austin, Texas. (Photo by Christian Petersen/Getty Images)
-

DORAL, Fla. – Tiger Woods posted his lowest score in a week on Saturday, a sterling 6-under 66 that helped him claw his way up the WGC-Cadillac Championship leaderboard. Which doesn’t sound like much unless you realize the tumultuousness of the past week.

“As far as most complete round [of the year], absolutely,” Woods said afterward. “I hit the ball a lot better than I did at Honda last Saturday. This was certainly a lot better round.”

One day after a 65 in the third round of last week’s Honda Classic, Woods withdrew because of lower back spasms. He returned to a revamped Trump National Doral this week without playing a practice round, choosing only to chip and putt his way around the 18 holes on Wednesday. Woods’ game looked in pain, if not his back, as he shot 76-73 during the first two rounds, losing a total of four balls in the water through windy conditions.

And then on Moving Day? Well, he looked like vintage Tiger again, posting eight birdies and two bogeys and getting himself into contention on a course where he’s won four times in the past.

“It was nice to get back in the tournament again,” he explained. “I held it together yesterday, a long day, a long, tough day and that gave me a chance today. I figured, hey, I'm only six back, that's definitely doable, especially with the conditions and how difficult this golf course is playing. If I just get back to even par for the tournament, I'll be right there and I did one better.”

Woods enjoyed nearly identical nines at the Blue Monster. He started with birdie on the first and added another on the third before a bogey at No. 4, then sandwiched it with birdies on 5 and 9. On the back nine, he birdied 11 and 12, bogeyed 13, then birdied 15 and 16, the latter of which after blasting a drive into a greenside bunker, then pitching to a few feet and draining the putt.

“I got my speed right,” he said. “I felt like I hit the ball a little better and left myself in good spots.”

If nothing else, Woods figures to complete his first Sunday round on the PGA Tour this year. He missed the secondary cut at the Farmers Insurance Open before withdrawing at the Honda.