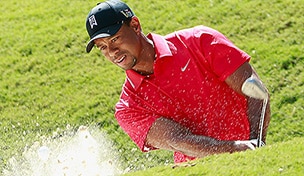 ATLANTA – It’s long been assumed that Tiger Woods will pair up with frequent partner Steve Stricker at the upcoming Presidents Cup, but Woods revealed Sunday that there are other candidates, too.

“Yeah, we've got a few,” he said. “[Captain] Freddie [Couples] has been blowing up my phone with some options and what he thinks for some of the pairings. We've got some options going into it.”

Among those believed to be included on that list are Matt Kuchar and Jason Dufner, each of whom Woods played with during weekend rounds at the Tour Championship.

Stricker previously played a Wednesday practice round with Jordan Spieth, fueling speculation that the United States’ oldest and youngest team members could be paired together.

“We're going to get together with [assistants] Jay [Haas] and Davis [Love III] and figure things out, what we need to do,” Woods added. “I mean, it's different, you know, a Ryder Cup and a Presidents Cup. You just know that you have to play all four days, and things are handled differently in a Ryder Cup and a Presidents Cup because of that, where you don't have to sit as many guys. If guys are playing, they just play and keep on playing well and just keep going.”