Woods hits tree, has injury scare in Round 3 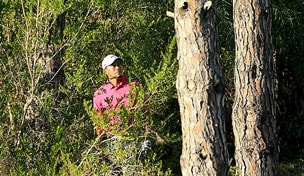 Getty Images
Aaron Baddeley of Australia plays out of the rough during day two of the Australian Open at Royal Sydney Golf Club on November 29, 2013 in Sydney, Australia. (Photo by Mark Nolan/Getty Images)  -

Tiger Woods survived some shaky swings Saturday at the Turkish Airlines Open, but, more importantly, he survived a scare playing out of the woods.

After one of his wayward tee shots left him in the trees at the 11th hole, Woods tried to squeeze an escape shot through a gap in the woods. He hit a tree with his follow through. Woods immediately let go of his fairway wood and winced hard, hopping off the shot in obvious pain while shaking his right hand. Woods said he actually hit a couple fingers on the follow through but wasn’t sure what he hit.

Despite all the adventure, Woods shot 4-under-par 68, leaving him tied for third, six shots off the lead going into the final round. He's going for his sixth victory this season.

How is his right hand?

“It’s a little tender,” Woods said. “I smoked it on something. I don’t know what it was, but I hit something hard.”

Woods appeared to hurt his left elbow and wrist during the U.S. Open at Merion in June. He withdrew from the AT&T National the week after to rest the injury.

After the scare at the 11th on Saturday in Turkey, Woods played on, not showing any significant lingering effects.

“I just deal with it, just play through it,” Woods said.

A day after torching the Montgomerie Maxx Royal course with a 63, Woods was wayward off the tee, missing drives right and left. He made birdie at the 18th despite driving deep into the woods on the left.

Woods made the turn at 3 under, but he made three bogeys against four birdies on the back nine.

“I wasn’t really playing that well, and it finally caught up with me on the back nine,” Woods said.

Woods said he knows what needs fixed before Sunday.

“I know what I’m doing wrong, it’s matter of stop doing it, and I’ll hit good shots like I did yesterday,” Woods said. “Yesterday, I was dialed in. It’s always hard to follow up a low round with another one, but I somehow managed to post 4 under.”