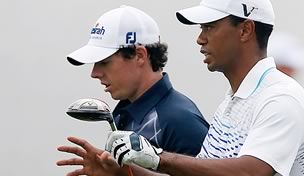 Thirteen of the top 20 players in the world – including seven of the top 10 – are in the field this week at the WGC-HSBC Champions in China.

Two of the names conspicuously absent: world No. 1 Rory McIlroy and No. 2 Tiger Woods.

And their no-show has unnerved the group head of sponsorship at HSBC.

“Of course we’re disappointed not to have the two top players in the world,” said Giles Morgan, according to a report Tuesday in The Telegraph (UK). “Both have sent me apologies, but this is an event which should be regarded by all players as it is by the tours and the media as one of the top events in the world.

“Therefore I feel strongly that the top players should be here. I believe that golfers have a responsibility to their sponsors. Without the sponsors there isn’t professional golf. I speak on behalf of the industry.”

Morgan isn’t the first to question why McIlroy and Woods aren’t teeing it up in the final World Golf Championships event of the year, particularly after the duo squared off Monday in a one-on-one exhibition in China. For that Duel at Jinsha Lake, both players were handsomely compensated, with Woods reportedly receiving a $2 million appearance fee and McIlroy a $1 million bonus.

This week, however, Woods is fulfilling corporate obligations in Singapore, while McIlroy is in Bulgaria to watch girlfriend Caroline Wozniacki play tennis.

Though Woods is not scheduled to play another tournament until his World Challenge at the end of the month, McIlroy will play three more events as he attempts to become the second player in two years to capture the money title on both the PGA and European tours.