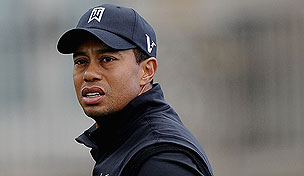 It’s the same red shirt, same Sunday stare, same steely resolve, but on consecutive Sundays with at least one hand on a trophy Tiger Woods has misfired.

His closing 75 at Pebble Beach on Sunday was particularly telling considering he was paired with eventual winner Phil Mickelson who lapped him by 11 strokes on Day 4.

Whether it’s poor putting (he needed 31 putts on Sunday at Pebble Beach), ball striking (he hit a week’s worst 50 percent of his greens in regulation) or a loss of confidence, the aura that once gave Woods the inside lane on Sundays has become an afterthought.

Two weeks ago Woods began the final round at the Abu Dhabi HSBC Golf Championship tied for the lead, closed with 72 and finished two strokes out of the lead.

Late last year Woods came up two strokes short at the Australian Open and at the 2010 Chevron World Challenge he lost a four-stroke lead and eventually a playoff to Graeme Mcdowell.

The snapshot does not provide a complete picture, and in fairness to Woods he outlasted Zach Johnson with a birdie-birdie finish at last year’s World Challenge, but the comeback is no longer about “reps” and “progress.” It’s about rediscovering that old Sunday magic.