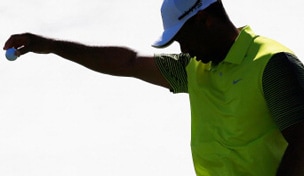 Getty Images
ORLANDO, FL - MARCH 18: Camilo Villegas of Colombia chats with tournament host Arnold Palmer on the range during the second round of the Arnold Palmer Invitational presented by MasterCard at Bay Hill Club and Lodge on March 18, 2016 in Orlando, Florida. (Photo by Chris Condon/PGA TOUR)  -

DORAL, Fla. –Tiger Woods was asked to sum up Friday’s play at Doral in a word, and there was no hesitation – “tough.”

Considering the carnage that was wrought on a windblown day the world No. 1’s assessment may be an understatement. Woods’ 1-over 73 left him at 5 over par and strangely still in the mix on a day that ended with just four players under par.

Following the conclusion of the weather-delayed first round early Friday and a 4-over 76, Woods weathered a fierce wind and a swing that wasn’t quite right to move up 22 spots on the leaderboard and into a tie for 28th place when he finished his round.

“Just had to grind it out,” said Woods, who hit three shots into water hazards in Round 2, including his drive at the par-5 eighth hole. “When we made the turn there were nine guys under par and now there are (three).”

Woods also indicated his ailing back, which caused him to withdraw from last week’s Honda Classic 13 holes into his final round, wasn’t exactly pain-free after a 26-hole Friday.