Woods pleased with ball-striking; 2 back in Boston 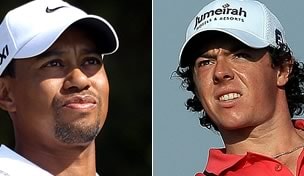 NORTON, Mass. – His work almost done for the day, Tiger Woods shook his head as he strode over the bridge in front of the 18th green at TPC Boston. He muttered something to himself, and then ripped at the brim of his white Nike hat, the way a pitcher does after surrendering a late-inning home run.

Moments earlier, from 106 yards, Woods had ballooned a wedge into the wind on the par-5 finishing hole and come up short of the green. Woefully short. Afterward, he grumbled that, “I know better than that,” and it took a nifty flop shot just to escape with par.

It was another frustrating result in a round full of them – or, you know, as much displeasure as one can muster during a 3-under 68 that left Woods only two shots back at the Deutsche Bank Championship.

Indeed, save for that miscalculation on 18, Woods has continued to pummel TPC Boston into submission with a tactical approach that shows off his revamped and dynamic long game. Though it was a similarly impressive ball-striking display, he walked off the course Saturday with a score four shots worse than the day before, when he rattled off six consecutive birdies during a first-round 64.

Note the similarities between the two rounds.

On Friday, he hit 10 of 14 fairways, missed only two greens and required 28 putts.

On Saturday, he hit 10 of 14 fairways – a few of the misses by just a few feet – missed only three greens and required 30 putts. Dig further, however, and it reveals that Woods missed five putts inside 10 feet in a 10-hole span, beginning on the par-5 seventh. All but one of those putts were for birdie.

“You’ve just got to let it balance itself out,” Woods shrugged afterward, “because yesterday I made everything. Today was one of those days where I had some good looks, missed them, but didn’t feel like I was really rolling it correctly.”

As discouraging as that stretch was, Woods said something clicked after the 15-foot birdie miss on No. 13. Per usual, “I just got my lines organized,” he said.

At 10-under 132, Woods sits only two back of Rory McIlroy and one behind 2010 British Open champion Louis Oosthuizen. Woods will play with Ryan Moore in the penultimate pairing during Sunday’s third round.

That test, strangely enough, will tell us more about Woods’ game than the 64-68 start. His 2012 season has demonstrated, in abundance, that he has no problem starting tournaments; in fact, his pre-cut scoring average of 69.65 is third-best on Tour.

Yet, for whatever reason – cold putter, nerves, fatigue, whatever – that superb play hasn’t translated to the weekend. (Or, if adapted to this rare case, the final two rounds.) Woods’ third-round scoring average (70.62) ranks 59th on Tour, which is fine, except on the final day he’s been even worse: 70.83. That’s 73rd-best on Tour, and certainly head-scratching stuff for arguably the game’s greatest closer.

Those weekend woes have surfaced in some of the year’s biggest tournaments, too.

His 70-73 weekend at the British Open prevented him from ever mounting a serious challenge.

His 74-72 weekend at the PGA Championship sent him skidding out of contention.

And just last week, his 72-76 weekend at The Barclays, one on of his favorite tracks (Bethpage Black), may have been one of the strangest yet.

That’s relevant now because anything less than another pair of red numbers here may not be good enough – especially with a frontrunner like McIlroy. Unlike Woods, the Northern Irishman has been at his best this season when the weekend arrives – ranking sixth and 15th, respectively, in third- and fourth-round scoring average.

Only one player stands between Woods and the leader, increasing the likelihood of another Rory-Tiger showdown – which, after playing together for the first time in a Tour event last week at Bethpage Black, feels a bit like a rematch in the BCS title game.

Perhaps because of TPC Boston’s favorable setup for long hitters, Woods has a history of high-profile tilts at this venue: a loss to Vijay Singh in 2004 that forfeited his No. 1 ranking; revenge against Singh in ’06 with a closing 63; and then a down-to-the-wire defeat to Phil Mickelson in ’07.

But if we’re in line for another star-studded matchup, it’ll depend largely on the state of Woods’ much-maligned flat stick. An answer should come by Sunday night.