Woods ready to shake off rust at Abu Dhabi 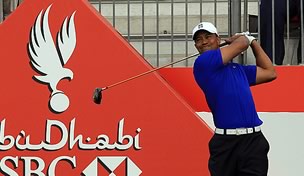 ABU DHABI, United Arab Emirates – Of all the things Tiger Woods missed during his seven-week off-season, it’s safe to say pro-am rounds were not on that list.

On Wednesday at Abu Dhabi Golf Club Woods spent more than five hours with Simon Cooper, an HSBC executive, and two other amateurs in his final tune-up before his season-opening round on Thursday.

A day earlier Woods sounded confident in his ability to implement “what Sean (Foley) wants me to do with the golf swing” and the work he was allowed to put in thanks to his newfound health; although, during a windy round he appeared more rusty than he had a day earlier when he played Abu Dhabi’s front nine.

He missed his first two fairways and chipped in from 30 yards at the par-5 second for eagle, but gave the gallery of 50 or so little to cheer about the rest of the way. Still, following his first victory in two years at December’s Chevron World Challenge and a solid fortnight in Australia there is a feeling the world No. 25 had turned a competitive corner.

“He seems like he’s happy with everything,” said Rory McIlroy, who played with Woods on Tuesday and will be paired with him on Thursday and Friday. “I know he’s definitely happy that he feels like he’s back to 100 percent (healthy). He definitely hit a lot of good shots out there.”

Woods also has a history of fast starts regardless of where his year begins. Since 1997, his first full year on the PGA Tour, he has six victories and 13 top-10 finishes in 15 season openers

“The game plan is still the same. Every event I play in I try and win,” said Woods before allowing for the season’s deepest field, “There’s also going to be 155 other guys in the field that are going to have a chance as well.”