Woods sticking to Symetra Tour with eye on LPGA 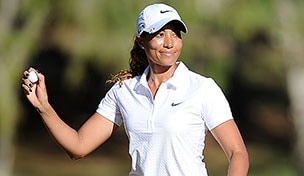 Getty Images
Thongchai Jaidee of Thailand shakes hands with Emiliano Grillo of Argentina on the 18th green during day 3 of the BMW PGA Championship at Wentworth on May 23, 2015 in Virginia Water, England. (Photo by Ross Kinnaird/Getty Images)  -

A full complement of LPGA sponsor invites are likely headed Cheyenne Woods’ way, but she says, as of now, she still plans to play the LPGA’s Symetra Tour full time.

Woods, who broke through to win the Australian Ladies Masters last week, is playing the Women’s Australian Open at Victoria Golf Club this week. She was originally in the field as a sponsor invite. The event is co-sanctioned by the LPGA and Ladies European Tour.

Woods, 23, said she plans to head home to Phoenix, Ariz., next week to play in the Symetra Tour season opener, the Visit Mesa Gateway Classic. She also plans to play the following week when the Symetra Tour moves to the Volvik Championship, outside Los Angeles. That will make for five consecutive weeks of tournament play. She also played the New Zealand Women's Open.

With her victory last week, Woods earned a two-year exemption on the LET. She also earned her way into the Evian Championship and the Women's British Open.

“So far, my plans haven't changed,” Woods said. “I still plan on playing Symetra and just earning my way, working my way towards the LPGA.”

Woods played the LET as a rookie last year, finishing 78th on the Order of Merit. She missed out trying to advance through LPGA Q-School the last two years but earned a spot on the Symetra Tour.

Woods, like any non-member, is permitted to receive six LPGA sponsor exemptions in a year. She also can play in additional LPGA events where she meets separate qualifying criteria. She could play the U.S. Women's Open, Women's British Open and Evian Championship without them counting against her six sponsor invites.

To qualify for the LPGA off money won this year, Woods would have to earn enough to rank among the LPGA's top 40 money winners at year's end. Only money won in LPGA events with a cut count toward non-member winnings. Also, unlike the PGA Tour, she couldn't earn membership for this season that way. If she makes the equivalent of top-40 money, she would secure membership for next year.

Woods can, however, earn LPGA membership for this year by winning an LPGA event.