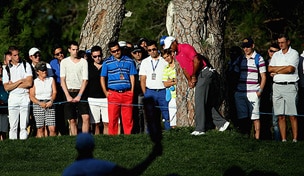 Getty Images
SYDNEY, AUSTRALIA - NOVEMBER 28: Adam Scott of Australia, Kevin Streelman of the USA and Jason Day of Australia prepare to tee off during day one of the 2013 Australian Open at Royal Sydney Golf Club on November 28, 2013 in Sydney, Australia. (Photo by Mark Nolan/Getty Images)  -

At one point on Saturday, Tiger Woods only trailed Victor Dubuisson by a stroke. After several wayward shots and a few run-ins with trees, Woods unraveled on the back nine and ultimately settled on 4-under 68. Here’s a look at where things stand at the Turkish Airlines Open heading into the final round:

What it means: In a four-way tie for the lead starting Saturday, Dubuisson pulled away with a 9-under-par 63. It was a bold statement from an unproven winner on Moving Day. The 23-year-old Frenchman is looking for his first European Tour title in his third season on tour. He has a big lead, but he also has some formidable competition chasing.

Round of the day: Jacqueline left his birdie putt for a 61 just short at the 18th hole. He tapped in for a 62, jumping 29 spots on the leaderboard into a tie for third.

Best of the rest: Stenson, the Race to Dubai leader, kept himself in the hunt for the Turkish Airlines Open title with an unsatisfying 69. He bogeyed the last hole and failed to take advantage of some good chances on the day. He will start Sunday tied for third, six shots off the lead. Woods struggled on the back nine, but with a birdie at the last from out of the trees he shot 68 to get into a tie for third.

Biggest disappointment: Lee Westwood started the third round just four shots off the lead. He stumbled to a 73, falling 13 shots behind the leader.

Biggest storyline heading into Sunday: Stenson leads the Race to Dubai and could take the drama out of next week’s Final Series’ finale at the DP World Tour Championship with a come-from-behind win on Sunday.