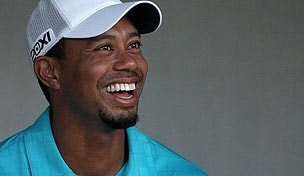 Tiger Woods will have an up-front seat to watch his alma mater take on Oklahoma State in the Fiesta Bowl.

Woods will be an honorary captain for the Stanford Cardinal as they take on the Big 12 champions in Arizona.

'Before I begin the new season, I will attend the Fiesta Bowl on Jan. 2 in Arizona to watch Stanford play Oklahoma State,” Woods said on his website Thursday. “Cardinal head coach David Shaw asked me to be an honorary team captain, and I happily accepted. For Coach Shaw to think highly enough of me to be involved in the game and be able to talk to his kids is very special.'

This summer, Woods revealed that during his freshman year in 1995, he shared a class – Portuguese Studies – with the now-head football coach.

'We go way back,” Woods said. “It's neat to be able to come back and help him any way that I can.”

Woods was last on the field for Stanford in 2009, when the Cardinal played host to rival Cal. The visiting Berkeley fans were a large presence in the stands, booing Woods at halftime as he was inducted into Stanford’s athletic Hall of Fame. Just a week later, Woods was involved in the Thanksgiving night automobile accident which changed his life and career.