Back to the Beach: Tiger returning to Pebble 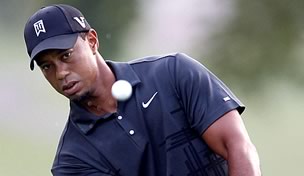 Getty Images
CHASKA, MN - AUGUST 13: Ryo Ishikawa of Japan lines up his putt on the fourth green during the first round of the 91st PGA Championship at Hazeltine National Golf Club on August 13, 2009 in Chaska, Minnesota. (Photo by David Cannon/Getty Images)  -

“I haven't been to this tournament lately, but I have a lot of good memories at Pebble,” Woods said on his website. “It will be fun going back.'

The 14-time major winner will make his first appearance at the event since 2002. Woods has a pair of victories at Pebble Beach Golf Links, both in 2000. He captured the Pro-Am by overcoming a five-stroke deficit to Matt Gogel and then won the U.S. Open the same year by 15 shots.

Since his last appearance, the starting field for the event has been cut from 180 to 156 players, and Monterey Peninsula CC has replaced Poppy Hills GC in the Clambake's three-course rotation.

'I've never played Monterey Peninsula and am looking forward to it,' Woods said. 'From all I've heard, it's a wonderful course and the greens are fast.'

AT&T has supported Woods over the years, sponsoring the AT&T National which benefits his foundation. The company used to have its logo on Woods’ bag, before the Thanksgiving 2009 incident which led to the unraveling of his personal life and loss of many sponsors.

The world No. 23 will begin his season Jan. 26 at the Abu Dhabi HSBC Championship in the United Arab Emirates.