Woods to remain with Steinberg 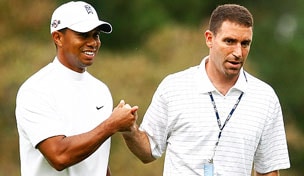 In a move that's big, but not altogether surprising, Tiger Woods announced Monday via his Twitter account that he will leave IMG and remain with his longtime agent Mark Steinberg, who left the company last week.

'Staying with Mark Steinberg. Total confidence in him. Excited about the next stage in my professional life. Fond memories of Mark McCormack,' Woods wrote Monday on his Twitter account @TigerWoods.

What is still to be determined is whether Steinberg will join another agency, or if he will start his own company. Woods has been with IMG since he turned professional in 1996. He and Steinberg began working together in 1999.