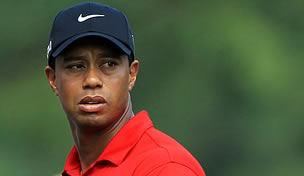 Tiger Woods announced via Twitter on Wednesday that he will not play next week’s AT&T National (watch video of Charlie Rymer breaking down the news), a move that surprised few and sets the stage for a prolonged stay on the disabled list for the former world No. 1.

Woods hasn’t played since the front nine on Thursday at The Players Championship when he withdrew citing a left knee and Achilles injury.

“Doctor’s orders: sitting out the (AT&T National). I’ll be in Philly to support the event. Feeling stronger every day, but not 100 (percent),” Woods Tweeted.

Woods will be at Aronimink Golf Club in Newtown Square, Pa., next week and plans to meet with the press at 2 p.m. (ET) on Tuesday and participate in the opening ceremony on Wednesday afternoon.

Woods’ next scheduled start would be the British Open Championship the second week of July, but his swing coach Sean Foley confirmed last weekend at Congressional that he has not worked with Woods since before The Players.

AT&T National, which benefits the Tiger Woods Foundation, would have been just Woods’ eighth start this season. He’s played more than 12 events just once since 2007 and doesn’t appear likely to reach that number again in 2011.

“Important for (Woods) to get 100 (percent) healthy. We have a good field and we’ll have a great event next week,” Tweeted Greg McLaughlin, AT&T National’s tournament director and the president of the Tiger Woods Foundation.

Woods is currently 107th on the FedEx Cup points list and has plummeted from third in the World Ranking to 17th.